How My Year Began: (I'm on my hols so I'm posting some stuff you might have missed. Original post date July 30th 2008)Paris Hilton clearly fancied her chances but I was having none of it. “Excuse me,” I said, pushing past her in an attempt to get outside.
“Please, come in for another dance,” she insisted.
“I’m from Belfast, love, we don’t dance.”
“Tell me of this Belfast,” she said eyeing me the way alien princesses used to eye Captain Kirk.
“You couldn’t handle it dearie, now if you don’t mind I have things to do,” I said.
“But I am streetwise, I have been to prison,” she said, begging now.
“Jail. Not prison. There’s a difference,” and with that I was gone out onto that weird, dead part of the Strip in front of the Luxor Hotel.
...
Our paths had never meant to cross. She’d been brought to the Luxor Hotel to host their 2008 New Year’s Eve Party. I was supposed to be staying at Circus Circus but it was full and I’d ended up at the Luxor as a last resort.
“Who were you talking to there?” a man asked me.
I was cold. No one tells you that Vegas in January is very, very cold.
“Paris Hilton,” I replied. “After me she was and I’m married.”
“What have you been drinking?” the man asked.
“Vodka tonic. Pacing myself,” I explained. 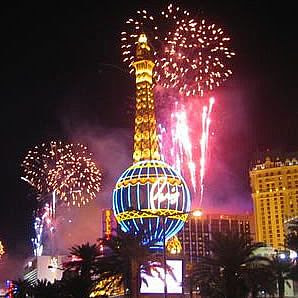 “Think you’ve had one too many, Paris has left already. Hours ago. You should go to bed, pal.”
“I’m not your pal,” I said but maybe the man had a point. Paris Hilton had in fact been a lot more articulate than I’d been expecting. Could I have hallucinated that whole episode? Certainly I was jetlagged and I’d been drinking since 6 o’clock and I’d taken a Tylenol PM and gone to bed and only gotten up because of the fireworks.
“What time is it?” I asked the man, but he was gone too.
...
Hell with it, I thought. The time didn’t matter anyway. I had come to Vegas on a mission and I was going to fulfill it. I zipped my fleece, pulled on my wool hat and started walking north. Past Excalibur and TI, the Bellagio and the MGM Grand. None of them held any fascination for me, for I was heading for Circus Circus.
...
The trip had been motivated by an article I’d read in Business Week (the only thing available at the Doctor’s Office – well it was that or Freshwater Fisherman and me and Freshwater Fisherman had a falling out when an article I submitted on declining stocks of baby eels was given the headline 'Eel Stocks in Decline' rather than my headline 'Elvers Have Left The Building'). Cute story huh? Only some of it is, alas, true. Now, where was I? Oh yeah, Business Week said that Circus Circus was going to get renovated and probably blown up to make way for a new improved Circus Circus. Circus Circus is famous among Vegas casinos as the first of the really big family joints. Before Circus Circus, Vegas was an adults only place, seedy, sleazy and actually pretty 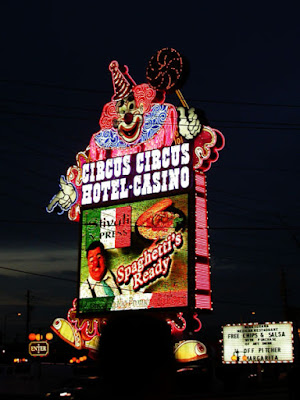 creepy. But the mob-, er, those marketing geniuses in charge of Circus Circus decided to have a free circus every day and every night and that way parents could dump their kids at the big top and they could go off and gamble their life savings, brilliant eh?
...
Diamonds are Forever was shot in Circus Circus and a lot of other films but the reason I wanted to go there was because of Hunter S Thompson’s Fear and Loathing in Las Vegas, a book which changed my life. Before F&L I was a law student heading for a prosperous career in the city and now I was an unemployed writer with no prospects whatsoever.
...
A pilgrimage should be hard. Did I mention it was freezing? And Circus Circus is bloody miles from the Luxor. A cab you say? You try getting a cab on New Years Eve. I’ll skip over the vomiting frat boys, half naked girls, and the dreadful covers band playing Ramones songs on the “Brooklyn Bridge”. Puke, blood, spilled beer, police horses spooked by fireworks going to the toilet everywhere - you don’t need me to draw you a picture, imagine Fellini’s Satyricon, but filled with Brits, Germans and Russian mafia and cold, bone chillingly desert cold. ...
An inept pickpocket tried to rob me by putting his hand into my fleece pocket while my hand was still in there.
“Hey!” he said.
“Listen companero, I’ve just given Paris Hilton’s dead blue eyes the brush off, don’t mess with me tonight,” I didn’t reply. And by the time I did think of something he was robbing people urinating against the New York New York 9/11 memorial which was karma.
...
When I got to Circus Circus itself I knew that the pickpocket had stabbed me and I had died in the ambulance and now I was in hell. In Fear & Loathing, Hunter Thompson takes a trunk full of drugs and begins seeing lizard people at the Circus Circus bar during a convention of law enforcement officers. Hunter describes Circus Circus as a cess filled insane asylum but obviously he was being kind. Don’t like clowns? Me either, now imagine a free circus in a casino with clowns and jugglers everywhere and thousands of kids running around. Clark County Law doesn’t permit them to get within two feet of a gaming table (kids that is, not clowns) so the kids are constantly being chased by hotel security while their parents put coin after coin into the slots. Circus Circus is the only casino with an RV park out the back, so it deliberately cultivates the poorest Americans. I hate the term white trash but let’s say that Circus Circus’s patrons aren’t flying out for brunch at Clooney’s pad in Como any time soon.
...
It wasn't just claustrophobic, it was more like Hieronymus Bosch's painting of the Last Judgement. Kids running, wheels turning, a dense layer of cigarette smoke, no obvious exit, clowns, security, thousands of people and then a sharp stabbing pain in my chest. I wanted to have one drink, just one, at the bar where Hunter Thompson saw the lizards but that wasn’t going to happen, I was either having a panic or a heart attack and I had to get out. I asked a blackjack dealer where the exit was and as per company policy he directed me deeper into the casino.
...
More smoke, more clowns, more kids.
My chest felt like there was an anvil on it.
Oh god, like Chef in Apocalypse Now I didn’t want to die in an evil place.
I had to get out. I started asking random people, where’s the exit, where is it, where, please for the love of Jesus. Finally a drunk guy who turned out to be a fire marshall showed me the way back to the Strip.
I was nauseous. My head was spinning.
I vomited pretzels and cocktail sausages and cheap vodka.
The horizon was red.
The sun was coming up.
A man in a party hat slapped me hard on the back.
I knew 2008 was going to be a bad year.
Posted by adrian mckinty at 7:45 PM