Belfast at the North Pole 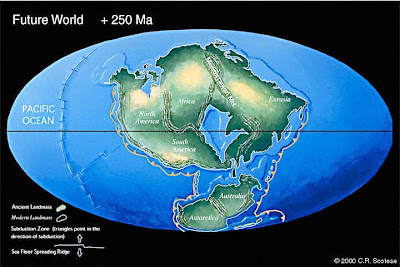 Yes, global warming is a problem, but it's only a sideshow when you consider that our present temperate climate is merely a blip between cycles of ice ages which have been occurring for the last million years. We're currently in a fairly typical interglacial period and no matter we do to warm up/screw up the planet, two or three thousand years from now most of North America and all of Northern Europe will once again be under a kilometre thick sheet of ice. If you don't believe me read this. Still, while the short sighted talk global warming and the long sighted talk about the coming ice age, the last laugh must go to geologists, who think not in thousand year increments but in million and ten million year periods. Plate tectonics is changing the map of the world and thanks to Strange Maps, I found this little beauty (above) which shows you what the continents are going to look like in the future. 250 million years from now Ireland will be the most northerly place on Earth, entirely surrounded by sea ice and under a glacier thicker than that currently on Greenland. Sadly there probably won't be any humans around 250 MY from now to witness nature's final triumph over Ireland's recent architectural and road building excesses.
Posted by adrian mckinty at 6:11 AM