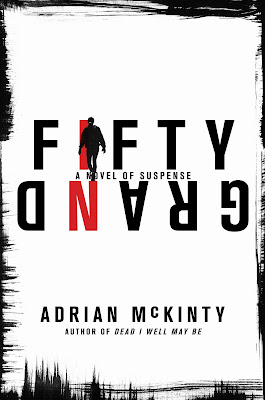 Something odd happened yesterday on Amazon.com. My book Fifty Grand has had an Amazon listing for about two weeks now and its sales rank has been chugging along at about 1, 300, 000 i.e. there are 1 299 999 books, videos, cds, shoes, sausages etc. on Amazon that sell better. Not terribly impressive but not that bad for a book that doesnt have a cover, reviews, isn't 100% finished, and is still 7 months from release. Anyway yesterday Amazon, for reasons unknown to me, changed the title from Fifty Grand - A Novel to Fifty Grand - A Mystery and within a few hours the book's sales rank moved from 1 300 000 to 259 000, which is still low but it represents a jump of over 1 million places! I haven't contacted Holt so I don't know if they initiated the title change, or whether this was Amazon's idea. As you can see from the provisional cover (right) the subtitle was going to be "a novel of suspense" but if calling the book "a mystery" can effect its sales to such an extraordinary degree I think I might have to go with that. And it is a mystery novel, though perhaps not a conventional one. I have a question for you dear readers - do you think subtitles matter? Is it important for you to know that a book is more of a mystery than a thriller? Does calling a book one genre rather than another define it in your mind, or is that an old fashioned idea? Please let me know and I'll pass on what you think to the powers that be. Thank you.
Posted by adrian mckinty at 7:45 PM