Those Evil Americans Are Trying To Ruin... 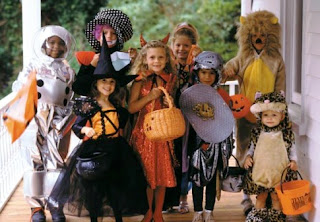 Whenever a newspaper needs filler in England they always dig up the same old meme: Those beastly Americans (or, increasingly, Eurocrats) are trying to destroy our: roadside cafes, chippies, great British sausage, football, Christmas, biscuits, old fashioned class based xenophobia. . . Well this time it's the turn of Bonfire Night. In Monday's Guardian an ill informed man called Andrew Martin wrote a piece on the American tradition of Halloween and why (yawn) it's too commercial, too packaged, too boring and is inferior to the rituals surounding Guy Fawkes Night.
...
What is Guy Fawkes Night I hear you beastly Americans ask? Well it's the night of November 5th when they drag an effigy of a Catholic rebel who tried to blow up Parliament through the streets, hoist him on a bonfire, throw things at him, and set fire to him. Lovely eh? Of course from Joan of Arc onwards certain upper class Brits have enjoyed burning Catholics as a hobbby and I suppose it's one of the great shibboleths of traditional England along with darts, Saturday night street brawling and saying rude things about the French, Yanks, Germans and Micks.
...
I am a Mick and I grew up not with Guy Fawkes Night but rather with Halloween, as did most Scots and not a few Welsh. Despite Mr Martin's silly claims, it isn't an American invention, in fact Guy Fawkes Night itself only dates back to the seventeenth century and before that all good Englishmen celebrated, yes, that's right, October 31st not November 5th. Martin doesn't appear to know that the Celtic inhabitants of the British Isles have never bought into the pseudo holiday called Guy Fawkes and neither did the colonials on the other side of the Atlantic. Now, if a province with as much sectarian division as Northern Ireland can reject Guy Fawkes Night because of its barbaric, racist, ritual killing aspect what does that say about places that do celebrate it and the people who want to champion it? It says a lot. Catholics weren't allowed to vote in the UK until 1829 and if a monarch (or heir to the throne) marries one it's considered so poisonous that said monarch must abdicate. This is the law of England right now, (no I'm not kidding - it's called the Act of Settlement).
...
Martin goes on to lament the growing popularity of Halloween among English children. "Why oh why can't someone brainwash the little loves to embrace the hatreds of their forebears," he seems to say. "Don't they realise that if we lose Guy Fawkes night, they'll come for cricket next?" And the villains responsible for these new fangled notions? Why those insidious Yanks of course.

The trick or treat component of Halloween was built up in the US because it offered the best merchandising opportunities. It is no accident that it is promoted most heavily over here by Asda, which is owned by Wal-Mart, a beneficiary of the billions of dollars spent very year in the US on Halloween.

Can you believe this tired conspiracy nonsense still gets published in papers of record? I would have expected it in the Daily Mail but not The Guardian. Who was the editor on this story? Who was the copyeditor? Well guys, dreary, ill thought out, lazy, hack work like this is killing the mainstream media. And no Mr Martin Halloween isn't a massive conspiracy foisted upon English schoolboys by American corporations, it's a rejection of tribal hatreds by kids who'd prefer to have a bit of fun on All Hallows Eve rather than participating in a sicko, sectarian auto da fe.
Posted by adrian mckinty at 8:03 PM