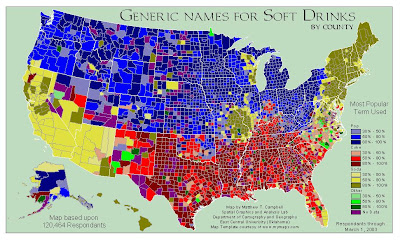 Pop and soda counties will vote Obama. Coke counties will vote McCain. Obama wins a plurality of counties. Obama wins. In terms of blog predictions my record has been 100 percent so far. (Click the map to enlarge it. ) ... Now if you believe in The Jinx (as all right minded people should) let me also predict that I am going to get selected to play left wing for Northern Ireland and I will score in every game all the way through and including the 2010 World Cup Final which Northern Ireland will win beating Brazil 5:4, having been down 4:0 at half time. Fortuna/The Jinx/Hubris should go for the more outrageous of these two predictions (although you cant tell the Jinx what to do).
...
Thursday Update.
Ok apart from Montana and the Dakotas I was right! Check out the latest maps on Cnn.com
...Thursday afternoon update: Check out this map below. These are the counties where the Republican candidate did better in 2008 than in 2004, not many of them and yes they're all "coke" counties. 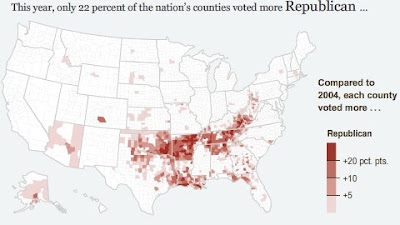 Posted by adrian mckinty at 4:44 PM