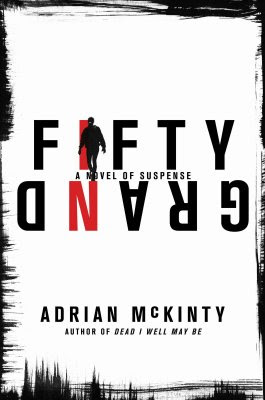 The Archbishop of the modern Irish crime novel Ken Bruen was kind enough to read Fifty Grand over Christmas and had nice things to say (below). It means a lot to me coming from Ken, a man who kicked serious Irish crime fiction from the 1950's into the 1990's. Mr Bruen, of course, is still firing on all cylinders, his latest American Skin is another in a long line of masterworks. Anyway here's what the swan feeding bard of Galway City had to say about Fitty G:

“Adrian McKinty has been blowing us out of the mystery water for quite some time now. The Bloomsday Dead—superb, Dead I Well May Be, phew-oh, but he has totally taken over the whole field with Fifty Grand. Think Don Winslow’s masterly Power of The Dog combined with José Latour and the sheer narrative drive of Joe Lansdale and you'll have some idea of this amazing novel. It has riveting mystery, politics of just about every shade, thrills on almost every page and the most compelling heroine in a Havana female detective named Mercado. I've rarely read a novel that had it all—human and drug trafficking, Hollywood excesses, illegals, ferocious vengeance—but what I found most compulsive was the wondrous compassion of the book. It moved me in ways I never anticipated. This is going to be the BIG BOOK of 2009.”—Ken Bruen, author of The Guards
Posted by adrian mckinty at 8:30 AM