The Meaning of Cool 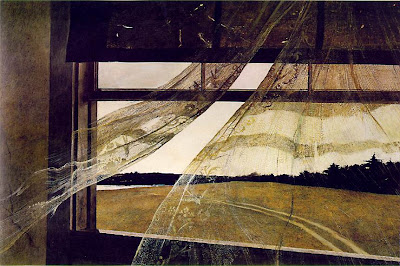 In the case of Jacobellis v. Ohio, 378 U.S. 184, 197 (1964) Justice Potter Stewart failed to come up with a definition of pornography but, he added "I know it when I see it." I thought of that this weekend with the death of the much ridiculed painter Andrew Wyeth who Robert Hughes once called so much "styrofoam and saccharine"; Justice Potter's name also re-entered my mind following an excellent interview in The Guardian with my favourite living poet Ciaran Carson. Neither of these gentlemen are hip to the in-crowd but to me they are a couple of bad asses. I can't tell you exactly why I think they're cool, but unlike Justice Potter I'll try.
...
Andrew Wyeth's obituaries used terms like "middlebrow," "second rate," "dull" etc. Slate Magazine even called him a "con man." He was the antithesis of Andy Warhol and the New York hep cats. Art critics hated the fact that he lived in rural Pennsylvania and painted largely pastoral landscapes, "rejecting the twentieth century." But a closer look reveals something odd about these landscapes, something off putting, something creepy. Cyberpunk author Bruce Sterling has talked about "slipstream fiction," i.e. fiction set in the real world but a real world in which everything is slightly off kilter. That's what Wyeth's pictures are to me with odd people and a hyper minimalist subject matter (as in Wind From The Sea above). This isn't a celebration of nature, this is nature after a catastrophe that has left only a few human survivors wandering around, dazed. Wyeth was popular with the general public and conservative Presidents so of course he was ridiculed by the intelligentsia, but to me his pictures (like Robert Frost's poems) are crafted in the architecture of weirdness. The perceptive Mark Rothko said of Wyeth, "his paintings are about the pursuit of strangeness," and that I think will be the final word, not the sneering from the supposedly cool crowd who wrote the obits.
...
Ciaran Carson has won most of the major UK poetry prizes for his work over the last thirty years but he's largely unknown. He lives a quiet life on the Antrim Road in Belfast but he grew up in the turbulent Falls Road area. The Guardian's interview with him reveals a man more interested in the shape and sound of words than in ideologies. How a poem is made, Carson says, is just as important as what it says. Carson's work includes such masterworks as Belfast Confetti and The Irish For No as well as an award winning translation of Dante's Inferno and yet he is not as well known as Paul Muldoon, Seamus Heaney or Late Review critic Tom Paulin all of whom were at Queens University with Carson in the early 70's. Ciaran Carson's problem as John Banville sees it in The Guardian is that he made the singular error of not migrating from insular Belfast to cosmopolitan Dublin. I don't know about that, if he'd gone South he would have moved in a different set, had different influences and perhaps fame would have hurt him. Perhaps not. Still Carson seems happy enough where he is and I wouldn't trade any of his Belfast poems for any productons that might have come from living in Malahide or a year in Berkeley or Princeton.
...
So what is cool to me? Cool to me is an artist doing his own thing, following his own muse and not giving a damn what other people are doing or saying about him. Of course how I exclude Bono and Chris Martin from this definition I have no idea.
Posted by adrian mckinty at 6:15 PM