My Own Stimulus Plan - Terraform Mars 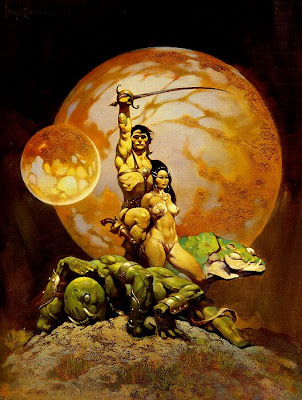 The war in Iraq is going to cost about 1 trillion dollars. The Bush bank bail out was 800 billion dollars. President Obama's stimulus plan calls for 800 billion in various public works projects and the new bank bailout plan will cost 1.5 trillion. What else could we have done with those 4 trillion dollars? We could have terraformed Mars and made it habitable for humans. According to the Mars Society a manned mission to Mars would cost about 150 billion - so we could easily have done that and provided hundreds of thousands of engineering jobs the way the Apollo programme did; but terraforming the planet would be an even more ambitious step. We'd have to divert comets into the atmosphere to give Mars more water, we'd have to seed the surface with hardy lichens and mosses and eventually bioengineered plants, we'd have to pump in CFC's to melt the polar ice caps. It's pricey to do all that but it's not 4 trillion dollars pricey. If everything went to plan Mars could have a high altitude breathable atmosphere in a few generations and although it does not have a magnetosphere (hats at all times and no T shirts) people could live there. Why go to Mars? Humans need to expand into space in case of a catastrophic comet strike like the one at the K-T boundary which exterminated the dinosaurs. But also because we need frontiers, challenges and new goals. It's the same reason we go to the bottom of the ocean or the tops of mountains or to Ballymena. Some scientists think that Venus too could be successfully terraformed and perhaps even Saturn's moon Titan. The nearest star system is only four light years away and with a 2o percent light speed nuclear impulse drive or a solar sail we could be there in a couple of decades. Millions of jobs, a common goal for humanity, a lifeboat for civilization and of course dusky Martian princesses a la Edgar Rice Burroughs - what exactly is the downside of this?
Posted by adrian mckinty at 8:01 AM