More Wicked Dope on Fitty G (Is That What The Kids Say?) 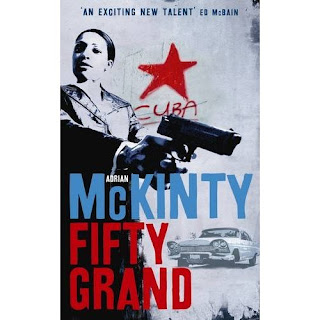 The Publishers Weekly review of Fifty Grand came out this week. It's a very nice review but I have to warn anyone who reads it below that it is rich in SPOILAGE. You have been told. If you want to get 50G you can preorder it on Amazon.com for an April delivery and it should be in most chains and mystery bookstores in May. The picture to the right is from the UK paperback original edition which will be out in July. If you're a tightwad (er, financially strapped) and you're feeling lucky I'll be giving away some first edition hardbacks in May in exchange for an Amazon review.

Irish crime writer McKinty (The Bloomsday Dead) delivers an intelligent novel of suspense about cultural identity. After a hit-and-run driver kills Alberto Suarez, a Cuban defector who’s been working as a rodent exterminator in Fairview, Colo., his daughter, Mercado, a talented young Havana cop, feels duty bound to avenge his death. She obtains a visa to Mexico City under a false pretext and later slips across the U.S. border to get to Fairview, which has become the happening place for the Hollywood cognoscenti. Since someone has to clean up after the wild parties, drugs and general debauchery that keep the town’s underground economy bustling, Mercado joins the silent community of illegal workers living on “Wetback Mountain.” As she investigates her father’s death, she discovers that his secrets, like those of Fairview itself, were far more extensive than she could have realized. In trademark fashion, McKinty winds up his provocative tale with a violent and memorable final act. (May)
Posted by adrian mckinty at 9:29 PM