This Is Adrian For God's Sake Why Would He Want To Destroy The World? 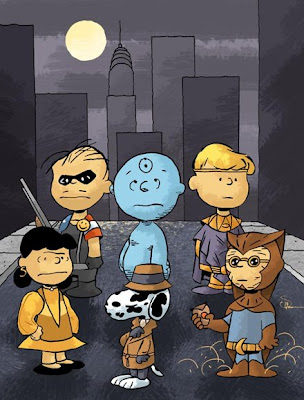 I wouldn't but with Fifty Grand lingering around the half million mark in Amazon sales (which means that there are half a million things selling better) the banshee of panic has descended upon the McKinty household. How can I get the book to inch up the Amazon rankings? In these difficult times it's all about marketing (as it is in not difficult times too) and as I see it there are five main approaches:

1. Attempt To Jump on a Bandwagon
What do you think the pic to the right is all about about from just being adorable?
2. Pick A Fight
I'm done with soft targets like Bono and Abba, I'm going into the hornet's nest. President Amadinnerjacket of Iran - your beard sucks! You heard me right pal, I could grow a better beard on a weekend bender to Glasgow than you've apparently been able to grow in your whole life. What do you say to that scrofula face? Hey, any chance of an attention grabbing (but non lethal) fatwah?...And if that doesn't work just wait till you hear what I have to say about the King of Thailand
3. Generate Fake Controversy
Did I mention that I wrote this book while injecting Alex Rodriguez with steroids, while he was partying with Madonna at a naked debauch at Rush Limbaugh's house? I didn't? Well I just have.
4. Demonstrate How Much Better Your Product Is Than The Competition's
See the thing about that Che movie is that Soderberg never actually visited Cuba. Or if he did (I cant be bothered to do the research on this) he got shown round a series of Potemkin villages and probably stayed at the Hotel Nacional which is run by the freakin Cuban secret police. Whereas I lived the life, man, got drunk with real Cubans, bribed real Cuban cops, got knocked over by a real Cuban car and got solicited by thousands of real Cuban hookers, etc. etc.
5. Have a Competition That Gives Away Books
Ok lets try that one then. My box of galleys came and I reckon I can afford to give away about four of them (I'd give away them all but the postage from Oz is shocking). Therefore my next post will be that long delayed and promised signed Fifty Grand ARC giveaway, so if you want to blag a signed galley stay tuned. Oh and what the hell a book to the person who can ID who's speaking in the title quote for this post.
Posted by adrian mckinty at 8:01 AM