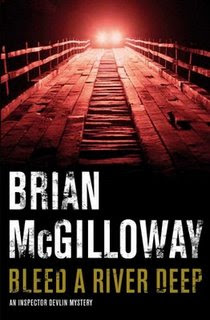 Ian Rankin kicked it off in Scotland, Ken Bruen, John Connolly and Colin Bateman ran with the ball in Ireland and now the Irish crime fiction boom is filtering down to the next generation. In the last month I have read three great crime novels from three new Ulster crime writers: David Park's The Truth Commissioner, Gerard Brennan's The Wee Rockets and last week I read Brian McGilloway's new book Bleed A River Deep. BARD is the third novel in McGilloway's Inspector Devlin series. Devlin is a great character because he is so ordinary, he is not a minor English poet, or an OCD riddled agoraphobe, or a drunken intellectual misanthrope he's just a regular copper trying to hold down his job in rural Donegal. The plot of BARD has a number of elements: a famous US senator is visiting the area and stirring up trouble everywhere he goes, a big hole in the middle of Donegal has become a literal gold mine, Devlin's personal life is becoming more complicated and the interaction between the Garda and the Police Service of Northern Ireland is not exactly going smoothly. I'm not going to provide anymore spoilers but I will say that this novel can be read as a one off if you haven't encountered either of the other Inspector Devlin novels before. What impressed most about McGilloway is the terseness and economy of his prose style and the way he captures the wild and bleak landscape of Donegal, in my opinion Ireland's most beautiful county. BAR 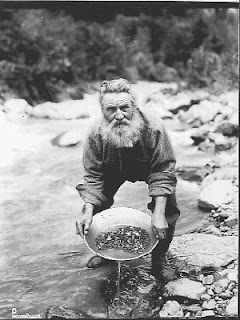 D deserves a wider audience in the US and it'll be cool when Inspector Devlin becomes a hit TV series (or so the rumour mill suggests) for you to say - oh yeah I read those books years ago, I am sooo ahead of the curve. Do yourself a favour and get BARD and for a real treat, try all three of the Inspector Devlin novels.
...
Last week I asked Brian a few quick questions about BARD and here's the Q&A below:

Q1. I was very impressed by the economy of your prose style. It feels extremely well honed and organic. Elmore Leonard says it takes about a decade to evolve a style. How long have you been perfecting your craft?
A: Thanks. Both my editor and I like quite lean writing, so I tend to pare stuff down as I write, because I know it’ll go in the edit anyway. I’ve been writing for years now, though only started writing crime with Borderlands. The first book I wrote was called One So high, about two psychiatrists in an asylum, one of whom is a patient. Actually, now I think about it, that was my second book: my first was the usual ‘Protestant and Catholic fall in love over the barricades’ guff you have to write when you live in Northern Ireland.

Q2. And as a follow up to that question, who are your major influences in the crime fiction and/or non crime fiction worlds.
A: I love crime fiction – particularly series novels. James Lee Burke is a big hero, likewise Ian Rankin, Michael Connelly, Dennis Lehane, Robert Crais... I’m not a big fan of Victorian novels, but have a soft spot for Dracula and The Moonstone – I really like the epistolary nature of the books. In Irish crime, there are too many to list.

Q3. Donegal is an interesting place, it has a northern accent, it's the most northerly county in Ireland and yet its part of the "south". How influenced are you by the landscape and geography of Donegal or could you be writing these books anywhere?
A: I agree with everything you’ve said here – it’s an unusual place because of all the ambiguities. That’s what I like about it in terms of setting, tough and it suits Devlin, I hope. In physical terms, it is a county of extremes; you have beautiful Atlantic coastlines, stunning natural scenery and then sparse scrubland all within half an hour of where we live.

Q4. There seems to be a major boom in Irish crime writing at the moment. Is it the zeitgeist, or changing demographics, increasing urbanisation or what? Any theories?
A: I think crime is perfectly suited to deal with a lot of the contemporary issues with which so called literary fiction would struggle. Crime allows us to look at what’s going on in the country and present it as it really is, or a fictionalised version of that. At the same time, good crime fiction can combine pace, character and is or can be incredibly enjoyable to read. I think crime fiction probably reflects the unease in Ireland at the moment with increased lack of trust in the political and judicial institutions and the seeming lack of control over both the drugs trade and gangsterism in general. In the North, I think the end of the Troubles allowed writers to focus on ‘normal’ crime while using that as a way to evaluate what went on here for the past thirty years. Even non-roubles books still carry their shadow I think.

Q5. What's next for Brian McGilloway in the literary world?
A: I’ve finished the next Devlin novel which is called The Rising, and which I’ll have to start editing soon. It deals with the increasing drugs trade along the border and the various groups involved in it. It also reintroduces Caroline Williams again, though not as a Guard. After that, I’m planning a stand alone set in the North at the moment before I go back to Devlin.
Thank you, Brian. For more on the terrific Brian McGilloway check out Crime Scene Northern Ireland and the uber talented Dec Burke's Crime Always Pays.
Posted by adrian mckinty at 5:59 PM