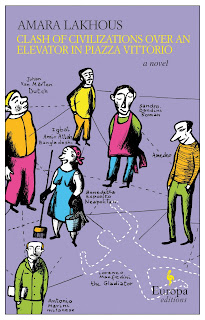 One of most enjoyable novels I've read this year is Amara Lakhous's Clash of Civilizations Over An Elevator in the Piazza Vittorio. It is a superior mystery novel set in a contemporary Rome that is filled with immigrants, intellectuals, indigents, and the borderline insane. Eleven apartment building residents tell their side of the story as we slowly find out what happened to the Storm Front skinhead who has been found dead in the building's elevator. Suspicion falls upon the saintly Amedeo who has gone missing and who seems to be the only one keeping order among the fissiparous residents of the run down block of flats in the otherwise charming Piazza Vittorio. Amadeo has secrets of his own, many of which are revealed through the series of diverse narratives and vignettes that comprise the novel. Each narrator's truth is complimentary and we get a full picture of what life is like for the building's residents as well as short dissertations on Iranian cuisine, pizza, Italian manners and the tactics of the glorious Dutch football squad of the 1970's. According to my book jacket they are making a film of Clash of Civ. and although it's going to be very funny it would take a reborn Fellini to do justice to this hilarious and insightful book.
Posted by adrian mckinty at 10:01 AM

Email ThisBlogThis!Share to TwitterShare to FacebookShare to Pinterest
Labels: amara lakhous, clash of civilizations over an elevator in the piazza vittorio
Newer Post Older Post Home