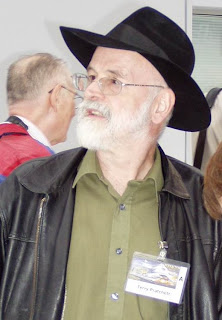 A couple of posts ago I was talking about Bellaghy in County Antrim which has put up a statue to commemorate the Seamus Heaney poem "Digging". Well Terry Pratchett, Sir Terry I should say, is getting an entire town in Somerset named after him. This from yesterday's Yorkshire Post: "Scores of fans dressed as Discworld characters turned out to see author Sir Terry Pratchett unveil road names at a new housing estate inspired by his fantasy world. Peach Pie Street and Treacle Mine Road can be found on the Kingwell Rise development in Wincanton, Somerset. Wincanton was officially twinned in 2002 with the fictional city of Ankh-Morpork from the novels, becoming the first UK town to link with a fictional place."
....
Terry Pratchett is not that well known in the US. He writes whimsical fantasy novels that I read a lot of in high school. I met him when he came to our little university SF&F society and he was a very nice bloke. However if Heaney can get a statue and Pratchett can get a town named after him surely JK Rowling can get a small European country to call her own? Lichtenstein perhaps or maybe Monaco or Andorra? Come on Potter fans isn't this the next logical step? I hear New Zealand is thinking of changing its name to New Middlearth so you better move fast.
Posted by adrian mckinty at 10:13 AM