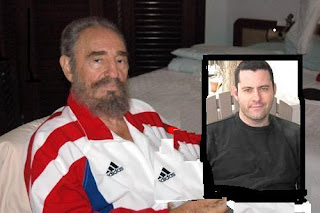 I got the final trade review of Fifty Grand this week from Bill Ott at Booklist. People have said nice very things about 50G in the trades and on various blogs (thank you again bloggers) but for some reason the book still isn't really taking off. The economy's tough out there and newspapers are cutting back on professional reviewers so I'm not entirely sure what I can do at this stage apart from - finally - letting everyone know that I am Fidel Castro's secret love child and getting a succes de scandale - but, you know, that's just not my style; so if anyone has any other PR ideas, I'd sure appreciate them. Anyway this is the link to the reviews on Amazon and here's Bill Ott's take below:

Changing direction from his celebrated Forsythe trilogy, starring an Irish immigrant who runs afoul of the New York Mob, McKinty offers a hard-edged noir about a female police detective from Cuba who travels illegally to Fairview, Colorado, hoping to make sense of her father’s death in an apparent hit-and-run on a frozen mountain road. Beginning with a gripping set piece in which Detective Mercado, disguised as a man, smuggles herself across the Mexican border and into the U.S., the novel jumps between Mercado’s under-the-radar investigation (Why was her father, a celebrated Cuban defector, posing as a Mexican immigrant?) and flashbacks to her own life in Cuba before Dad abandoned the family. Posing as an illegal maid from Mexico, Mercado infiltrates a group of supercilious Hollywood types who may hold the answers, all the while constructing a macabre revenge plan. McKinty tightens the screws on his heroine effectively, forcing her into a classic noir conundrum from which there appears to be no escape. An impeccably constructed thriller supported by a cast of finely rounded, Elmore Leonard–like characters - Bill Ott
Posted by adrian mckinty at 10:01 AM