The Freakiness of Google Street View 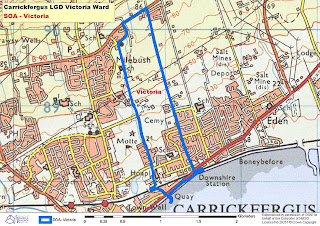 Marcel Proust needed only a taste of Madeleine to time travel back to his childhood. For us its even simpler and much more disconcerting. If you Google Carrickfergus the first thing that comes up is the Google map, if you click the map, there's a bigger map and inside it a picture with the label "google street view" if you click the pic, one of those houses that comes up is my mother's. I'm not going to say which one but there it is after a couple of clicks. This evening I went on a virtual tour of Carrick and I was well weirded out. After googling Carrickfergus and clicking the map and the street view picture, you find yourself at the bottom of Victoria Road. If you go straight on following the arrows you immediately pass my local supermarket, chippie and off license and if you continue up the road 100 yards to the first roundabout and turn left on Princes Way (you'll also need to look left on the little compass thingy) you come to my old school, Victoria Primary. If you then turn right on Coronation Road you're on the road where I spent most of my childhood and eventually you'll pass the house, indeed the very bedroom, where I was born. I was quite shocked by all this, especially when I continued up Coronation Road, turned left again and went past Victoria Cemetery, for there with its name blurred for privacy was my father's grave. After the initial shock came a feeling of happiness and I thought how wonderful it was to see and virtually walk around Carrick from 10,000 miles away.
...
My former philosophy tutor John Gray is at the forefront of an anti Enlightenment movement which claims that fundamentally there has been no progress in human affairs. They make a few mealy mouthed exceptions for science, of course, but some of their ilk even skip that. On another occasion I will attempt to demolish this trendy (at least since Rousseau) view but for now I'll just say that they can keep their pre antibiotic world of slaves and servants, I'm happy with medicine, warm baths and Martian Rovers and although I don't have Proust's imagination, memory, concentration, talent or cork lined study where I can explore the recesses of my brain, thanks to the brilliance of Wifi, Apple and Google Street View I can go for a walk around my old haunts in Carrickfergus anytime I want and that's pretty cool.
Posted by adrian mckinty at 5:36 PM