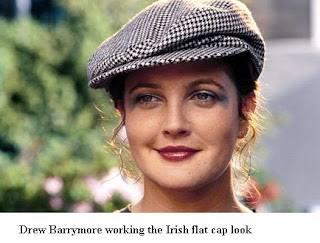 The Hollywood director known as McG has never really been on my radar screen. He's directed four films: two Charlies Angels flicks, a sports movie and the most recent Terminator. I havent seen any of them. In fact the only thing of his that I have seen is a video for the Offspring, which was pretty funny. I did know that his real name was McGinty and it irritated me that he called himself McG. McGinty is a bit of a joke name in Ireland because of the famous comic song Paddy McGinty's Goat - Paddy McGinty's is also the name of several "Irish" pubs throughout the world whose fraudulent Oirishness of toothless old men, flat caps and overturned rowing boats is a total embarrassment. McG, I thought, was running from this name and heritage by giving himself a Hollywood appellation - this however turns out to be a mistake, more on that in a minute.
...
First though my brush with the McGintys. For much of my life people I don't know have called me McGinty instead of McKinty probably because there are quite a few McGintys in the world and relatively few McKintys. McKinty and McGinty however are not a different spelling of the same name. I found this little primer online: The surname McKinty appears to be of medieval Irish origin and is originally recorded as a variant of MacEntee, whose derivation is from the Gaelic 'Mac an tSaoi' translated as 'the son of the scholar', (the Irish word saoi is used to denote a scholar or poet). The MacEntees are noted in the Chancery Rolls, Fiants, Hearth, Money and other 16th and 17th century records and seem to have lived mostly in the Counties Monaghan and Armagh. McGinty, and MacEntee are unrelated as the former is a Donegal surname and does not appear in the 1659 census or the Elizabethan Fiants. The first recorded spelling of the McKinty name is by Patrick McKinty in a January 1794 document in Carnmoney, County Antrim. Thus we are separate, but equal, tribes of Micks.
...
Back to McG the director. His real name is Joe McGinty but this is what he says about the name McG: "It is easy to hate a guy called McG. It seems like a window into his [Hollywood] sense of self-importance. [But this is sheer] lunacy because it's just short for McGinty. My name is Joseph McGinty Nichol. My mother's maiden name is McGinty. My uncle is Joe, my grandfather was Joe. I was called McG since the day I was born because we were broke and there were three Joes living in the house. There's no Hollywood, 'I think I'll give myself a nickname' bull. It just is. [In fact] I would be a sell-out punk if I ever rolled over and said, 'Well, ok, call me Joe.'"
... 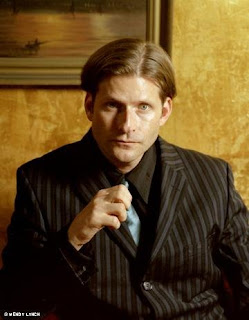 I'm willing to cut the guy a break, anyone who survives working with the intense Christian Bale and the intense/insane Crispin Glover (right) is probably a fine human being. Still not everyone's got the memo. On Friday I heard Mark Kermode, the BBC film critic, go off on McG, criticising his film making and, at some length, his name. Kermode obviously still labours under the misapprehension that 'McG' is a Hollywood concoction, though I'm not sure he would understand McG's explanation, as to get it you would need to have an appreciation of working class Irish life and Kermode of course (like a ridiculously high proportion of the BBC's on air talent) went to an elite private school. Anyway Kermode's one to talk. . . His real name? Mark Fairey.
Posted by adrian mckinty at 10:23 AM