Pandemonium in the Sheldonian 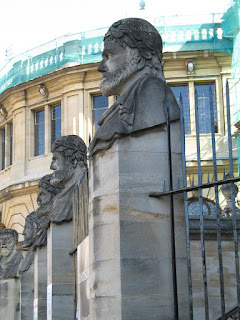 Outside Oxford University’s Sheldonian Theatre the thirteen “Emperors’ Heads” have been looking a little less stoical than usual. In the university’s 850 year history there have been many scandals but nothing quite as a juicy as Oxford’s recent attempts to elect a new Professor of Poetry. Nobel laureate Derek Walcott was forced to withdraw his name from consideration when allegations surfaced that he had "sexually harassed" a student, other candidates were driven into the woodwork and finally, after a contentious campaign, the Oxford University Convocation elected Ruth Padel as the new vicar of verse. Ms Padel however didn't last long as it quickly emerged that she was the one who had helped orchestrate the campaign against Walcott; so she tendered her resignation before actually taking up the job. It’s a right old mess and if among the Emperors Heads 68AD is infamously the year of the four Caesars, 2009 may become known as the year of the three poets.
...
I was part of another controversy surrounding the post in 1993 when I went to see the then Professor of Poetry, Seamus Heaney, give a lecture in Sir Christoper Wren's lovely Sheldonian Theatre. Before Seamus could get going a man burst onto the stage angrily "protesting against modern poetry." He droned on incoherently for quite a while before a bunch of us, myself included, could take it no more and we bum rushed the eejit outside. The current scandal has received quite a few more column inches in the press than that ruckus, but no one that I've read has brought up the dirty little secret of the Oxford Professor of Poetry: most of the poets who have had the job are complete rubbish. Take a gander at this list on Wikipedia. Until you get to the 1950's, you are looking at a parade of utter mediocrity. The poets never even considered include Byron, Shelley, Keats, Wordsworth, Coleridge, Browning, Yeats, TS Eliot, Philip Larkin etc. and really it's only in the last few decades that they have started to get half decent writers. I'm quite interested in this now and as a member of the University Convocation I have the right to vote, but I’m not going to because you have to vote in person and I live in Australia; I would however like to suggest someone for the job. Four of the best recent Professors have 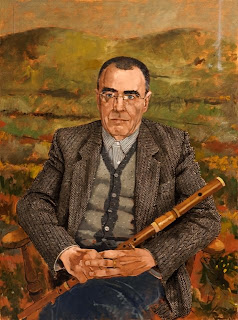 been Irish or Anglo Irish: C Day Lewis, Robert Graves, Seamus Heaney and Paul Muldoon. Micks seem to have the right temperament for public professors of poetry. The bardic tradition in Ireland is at least two thousand years old and among the Celtic kings poets were the most honoured members of the Court. To become a warrior in the Fianna elite you were tested on your ability to fend off multiple spear attacks while reciting, flawlessly, memorised lines of verse. Although his spear repelling skills may be rusty, I think Belfast poet Professor Ciaran Carson is the right man for the job. Multi-lingual, brilliant, a repected award winner, funny, Uillean pipe player - Oxford could do a lot worse...as we have seen.
Posted by adrian mckinty at 1:12 PM