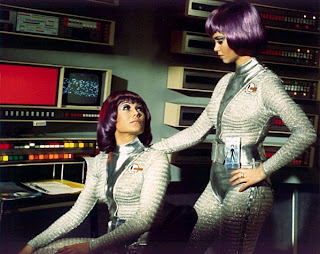 Last week at my mum's house in Carrickfergus, I had the odd and quite pleasant experience of drinking tea, eating toffee shortbread and watching UFO, Murder She Wrote and Countdown on TV before going up to Belfast for a reading at No Alibis bookshop. The toffee shortbread and tea were excellent as usual and those TV shows were a portal to a different time. UFO was a crackpot Gerry Anderson series from 1970 set in the distant future of 1980 when aliens were attacking the Earth and everyone wore wigs. I loved this embarrassingly hokey show and had all the Dinky toys. The episode I saw was about a blind woman in the west of Ireland who has an alien in her house and doesn't even know it. Genius. Murder She Wrote alas was not my favourite episode which was also set in Ireland, but an Ireland that looked suspiciously like Southern California and featured the worst Irish accents in the history of the performing arts. Bad? Brad Pitt bad. It was still a pretty good episode though - it was those annoying young people that done it. Countdown of course is that words and numbers game which is a boon to shut ins and the unemployed everywhere in the British Isles, but the last time I saw it both Carol and Richard were on the show; now Carol's left and Richard, alas, has passed on. It just wasn't the same. How does this tie into the title of this blog, I hear you ask? Well a couple of weeks ago I wrote a piece for The Times on my 10 Favourite Female Detectives and in it I mentioned both Murder She Wrote and Countdown in fairly glowing terms. The piece was published yesterday and last week's viewing confirmed all my happy memories from my days of signing on at the dole office.
...
You can read the My Favourite Female Detectives article in The Times, here and you can read a little about my adventures at No Alibis on Ger Brennan's CSNI here.
...
BTW the girl on the right in the UFO pic is Gabrielle Drake who is the brilliant English folkie Nick Drake 's sister.
Posted by adrian mckinty at 10:02 AM