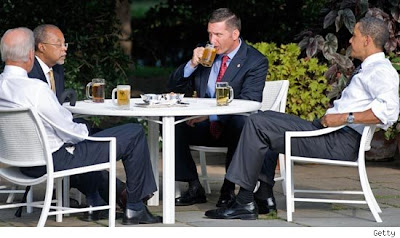 If you're not American you may have missed the Gatesgate story (lucky you) so I'll summarise: black Harvard Professor, Henry Louis Gates, locked himself out, broke into his own house, got spotted by a busybody neighbour who called the cops, the cops came, harsh words were exchanged, the cops lured Gates outside and arrested him and then all the charges were dropped. Gates is a friend of President Obama who said that the Cambridge police were "stupid" for arresting him. End of story, right? Wrong. Right wing nuts on the Fox network (who called last year for Candidate Obama to be assassinated and successfully incited the murder of an abortion doctor earlier this year) are now saying that Obama hates all cops and white people. Instead of ignoring this nonsense (Obama of course has a white mother and was raised by his white grandparents) Obama said, look guys lets get together and have a beer: Henry, the cop, me and Joe Biden.
...
They met on Thursday at the White House for this ghastly sounding party and I really couldn't care less about any of it except that it's interesting to learn what they actually drank:
...
First, Joe Biden: Bucklers - a non alcoholic lager. This tells me a lot about JB. Only two types of people drink Bucklers. Designated drivers and alcoholics. Biden has a secret service limo to take him around so it's not the former; could it be the latter? Well, he's working class Irish, he used to drink heavily and he's had a lot of family tragedy. Draw your own conclusions.
...
Second, Dr. Gates: Reports differ on what Henry Louis Gates drank. Some say Red Stripe, others Sam Adams Light. Red Stripe is an awful Jamaican beer which is watery, tasteless, chemically and insipid. There's only one place to drink Red Stripe and that's the beach at Negril when the sun's setting and you are toasted out of your tree on fresh cut gange. Dr Gates may have had a good holiday to Jamaica once but trying to recapture that experience by drinking Red Stripe in America is a huge mistake. Sam Adams Light is the worst beer Sam Adams make. Good company, very bad beer.
...
Third, Police Sergeant James Crowley: Blue Moon Wheat beer. Not a bad choice from Sgt Crowley. Blue Moon wheat isn't as good as their Winter Ale but I've had worse. It's got a slighty lemony flavor and a moderate kick. Good for a summer's day and you could knock back 6 of them and still hold your own with the President.
...
Fourth and last, President Obama: Bud Light. There's a pretty good chance that Bud Light might be the worst beer in America, possibly the world. I had it once at a party and to me it tasted like mild washing up liquid in a glass of coloured water. Beer Rater has no good things to say about Bud Light. They give it a rating of 1.15 and its in zeroth percentile for good beers. Yes, it is that bad. What was Obama thinking? He's a sharp guy with taste and discretion, he can't actually like the stuff. Maybe he was influenced by his good pal George Clooney who, short of a few bucks, shills for Budweiser, doing the voice overs for their commercials? Maybe it's because the company gave to his campaign? Perhaps, but actually I suspect that Obama thinks that drinking Bud Light will make him seem more of a "man of the people" or something. Nothing could be further from the truth. It makes him look like George HW Bush in a supermarket or Sarah Palin in a library - weird and out of place.
...
Life is too short to drink bad beer. Don't do it. Not everyone can get Westvletern (though I did) but if you go to Beer Rater's best of page you'll find something good for you and your pocket and please never drink Bud Light not even when it's to placate the tinfoil heads who watch Fox News.
Posted by adrian mckinty at 10:15 AM