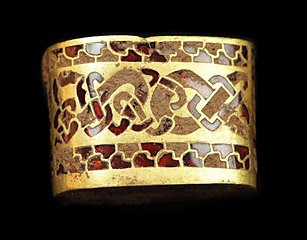 As everyone now knows a huge Anglo Saxon horde of gold was found in a field near Walsall in July by an unemployed chap out with his metal detector. I wish nothing but good luck to Terry Herbert who found the gold and stands to make a couple of million quid, but I do want to cast a skeptical eye on the experts the British government has put on this treasure trove. At the press conference on Thursday with tears in his eyes Dr Kevin Leahy started quoting from Beowulf as he described the dozens of gold and silver objects recovered from the field. What Beowulf has to do with anything is beyond me. Beowulf dates from the 10th century and these items come from the 6th or 7th. It would be like quoting from Cheers to explain something that happened at the Salem Witch Trials. I'm also suspicious that these objects have been definitively called Anglo-Saxon. Do they look Anglo Saxon to you? To me the artifacts are unmistakably Celtic in origin and design. And here's a few reasons why they might not be Anglo Saxon: Firstly, they were discovered in an area which was a boundary zone between the native Britons and the invading Germanic peoples. Secondly the Germans were pagan, the West Britons Christian and yet three crosses and a verse from the Bible in Latin were found in the horde. Let's unpack that a little. Who do you think is more likely to have a Latin Bible verse written on gold on them, an illiterate pagan Anglo Saxon warrior or a Celtic Romano-Christian Briton? Well, according to the experts the illiterate pagan of course. Thirdly the tentative attachment of this horde with Penda, King of Mercia is also odd because Penda claimed to be a direct descendant of Wotan and was certainly not a convert to Christianity (although some of his children may have converted if you believe Bede).
...
So what's going on? This is what I think: The entire "Anglo Saxon" history of England is largely bogus. The Germanic peoples from Denmark and Saxony did certainly migrate to England in the fifth and sixth centuries but the native Celts were not slaughtered or driven from their land. Thanks to DNA research by Bryan Sykes (et al.) we now know that a relatively small number of Germanic invaders became an elite upper caste in the central and eastern parts of England some time in the fifth and sixth centuries. The great mass of the English people remained Celtic in language, culture and origin. These Germanic invaders did not penetrate Wales or Scotland or Ireland, but the idea that the English are different from the peoples of the "Celtic fringe" has been hard to shift. It was a largely Victorian notion and comes coupled with the idea that the English are Germanic, democratic, logical while the Celts are romantic, dreamy, talkative, illogical. This entire idea is - excuse my Anglo Saxon - total bollocks. A lot of English archaeologists haven't caught up with the DNA evidence yet because it shatters the paradigm of the history/propaganda they were taught in school and university.
...
They need to get with the new science. England like Ireland, Scotland and Wales was a Celtic country (with Germanic overlords) until much much later than anyone realised. To me this treasure is a startling example of Celtic art and to my mind has nothing whatsoever to do with Anglo Saxons (a dodgy term in itself), King Penda, or, God save us, Beowulf.
Posted by adrian mckinty at 10:01 AM