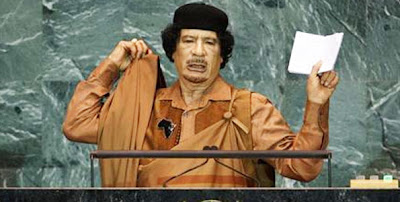 For the last couple of days I've been eagerly awaiting Colonel Gadaffi's speech at the UN. Yesterday I stayed up late to watch it on Cspan and I wasn't disappointed. Gadaffi really brought the crazy, but he also brought together a number of themes that this blog has been rattling on about in recent months: Accusing the UN delegates of being nothing more than murderers he nicely summarised my posts about the Hitchcock classic North By Northwest. He then complained about how impossible it was to get a good night's sleep because of noisy neighbours, which I can empathise with. Seemingly losing his marbles completely at one point Gadaffi turned to the assembled ambassadors and heads of state and demanded to know if any of them "had information about who killed JFK" which dovetailed nicely into my posts about James Ellroy's The Cold Six Thousand. The Libyan leader's speech was only the second longest in UN history; he was of course outlasted by Fidel Castro whose little brother Raul makes a cameo appearance in my novel Fifty Grand, which I've posted about here. (Nice plug, eh?) It was the speech of a true nutter and the only thing he forgot to talk about which I've covered was UFO's.
...
Anyway, you can read an excellent piece of reportage on Gadaffi's UN speech in The Guardian here and if you're a fan of the whole Chavez-Castro school of rhetoric you can watch the whole barmy thing on Cspan.
Posted by adrian mckinty at 10:11 AM