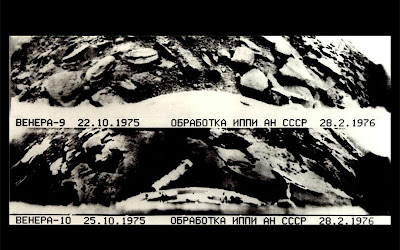 Japan's new First Lady, Miyuki Hatoyama is a remarkable woman in many respects: she travels, she writes, she's an experimental cook. I like the cut of her jib but she said something a bit odd when she talked about her UFO experience. According to a slightly sensational account in The Huffington Post she claimed in a book last year that the aliens abducted her while she was asleep and then:

While my body was still in bed, I think my soul rode on a triangular-shaped UFO and went to Venus. It was a very beautiful place and it was really green.

Now, a few years ago I had my own, er, close encounter, with a triangular shaped UFO over Colorado so that part of the story I might buy. But no one's going to Venus. This from Wikipedia:

The pressure at the planet's surface is about 92 times that at Earth's surface—a pressure equivalent to that at a depth of nearly 1 kilometer under Earth's oceans. The density at the surface is 65 kg/m³ (6.5% that of water). The CO2-rich atmosphere, along with thick clouds of sulfur dioxide, generates the strongest greenhouse effect in the Solar System, creating surface temperatures of over 460 °C (860 °F). This makes Venus's surface hotter than Mercury's.

In the olden days before Russia began sending probes to Venus many people assumed that because the planet was covered with clouds naturally it was tropical, lush and green. There were many many science fiction novels about visits to this Venus and encounters with Venusians. But now we know better, there are no Venusians and never will be. So please, when the aliens come again Mrs Hatoyama, get them to take you to Europa, or Titan, or Mars or somewhere where life, at least, has a fighting chance. And bring a camera.
...
...
BTW with remarkable prescience David Byrne wrote the theme music for this incident and this blog post twenty five years ago. (Sorry if its copyright restricted in your country, now you know how I feel everytime someone links to Hulu).
Posted by adrian mckinty at 10:01 AM