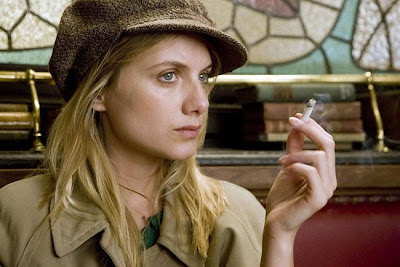 I thought Inglourious Basterds was a bit feeble. For me it had the vibe of a well meaning Valentine card from Quentin Tarantino to his surrogate father Harvey Weinstein - a goyish anti-Nazi revenge fantasy light years from the ironic, subtle revenge fantasies of, say, Mel Brooks or Lubitsch's To Be or Not To Be. Unless you've drunk the Kool Aid in Tarantino Land (like most of the critics on Rotten Tomatoes) you've probably had your emperor/no clothes moment; but let's say you're one of those who liked IG, well then, I need your help understanding a couple of things:
...
#1. I get the fact that IG is an alternative history, I see that, I've read a lot of counterfactuals and alternative histories, but one thing I know about that genre is that they all still have to obey their own internal logic. You need self consistency in an alternative history for the story to make sense - unless you're in a universe where the rules of formal logic are actually different and if so you need to explain that. So help me understand this then, please. Recruiting the Basterds Brad Pitt explains that he fought the Germans throughout Sicily and Italy as the Allies did in fact do in the real World War 2. In Josef Goebbels' propaganda film we actually see some of this campaign fictionalised. Germans fighting American troops as they push up the spine of the Apennines. So why is it when Hitler is interviewing the Wehrmacht Private about the Basterds campaign of terror in France that the enormous map behind Hitler's head shows the Reich as it was in roughly November 1942 before Rommel was driven out of the Africa and before the allies invaded either Sicily or Italy? The disposition of forces is at least two years out of date, which is a bit of a serious flaw in a battlefield map. This looks a lot to me like a plain old fashioned cock up rather like the moment in the film Atonement when they flash forward to 1939 and we're at the Dunkirk evacuation (which of course happened in 1940). Tarantino prides himself on his attention to detail and care with every element of a scene so perhaps someone could explain why this map is so wrong.
...
#2. This problem is more to do with narrative structure. If you removed the Basterds completely from IG I think nothing in the story would actually have changed. The entire Nazi leadership (SPOILER ALERT) would all still die at the end and in a much more grisly fashion, burned to death by Shoshana (above) and her assistant. Do the Basterds turn any narrative wheels at all in this screenplay, or are they just one enormous sub-plot that doesn't actually go anywhere? Again QT prides himself on the tightness of his scripts, but this seems poorly thought through.
...
I'm not trying to pick on Quentin Tarantino. The first 15 minutes of IG and Reservoir Dogs, Pulp Fiction, KBpt1 and Jackie Brown prove that he is a big talent, but I do wish someone would stage an intervention at this point. Everyone needs to listen to older and wiser counsel from time to time and Harvey isn't doing his boy any favours by letting him play off the leash film after film.
Posted by adrian mckinty at 12:53 PM