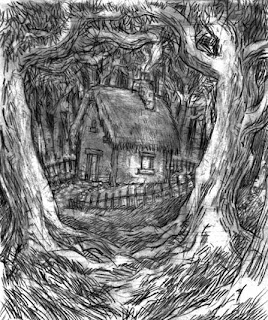 Unfortunately I grew up in the era when film directors realised the full potential of having creepy children in their movies. I think it may have begun with the blonde geniuses in Children of the Damned but by the seventies Damien in the Omen really took the prize for terrifying toddlers. Damien freaked me out and then at a very vulnerable age I happened to see Stanley Kubrick's The Shining and that was the icing on the nightmares.
...
Of course since then we've had The Sixth Sense and The Ring so that now the scary supernatural child is almost the default position in horror films and the trope is so pervasive you begin to suspect it even in your own life. Tonight my daughter and I were out for an evening walk in a tumbledown part of St Kilda when we passed a house covered in ivy with a decrepit roof, old fashioned shutters and windows that had a vague, oddly sinister fairy-tale appearance. The garden however was full of wild flowers, so I said "Oh what a lovely house." My daughter replied, "Yes, but the gate is talking to me and wants me to go in." I'm pretty sure that if I hadn't been conditioned by The Ring, The Omen etc. I would have just ignored this remark; as it was, a chill went down my spine. "What do you mean the gate was talking to you?" I asked. "Oh you know, the way everything talks to you," she explained.
...
I was scared and did not press the matter further. I decided that I didn't want to know. Finding out accelerates you to Act 2 and for the present I want to stay in Act 1. Of course it's nothing more than the innocent ramblings of an imaginative seven year old, but then again...
Posted by adrian mckinty at 9:18 AM