Richard Dawkins Is Not Really An Atheist 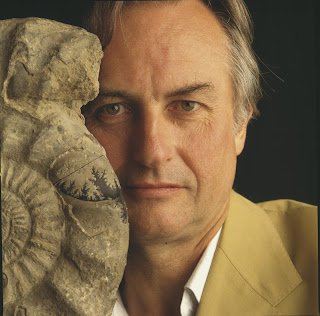 Richard Dawkins was on BBC 5 Live recently talking about his latest book and he said something that struck me as rather odd. Paraphrasing (because the BBC's podcasts disappear after a week) he mused that there may be super beings out there in the universe indistinguishable from gods, who are the end products of a long period of evolution on their home worlds. He said something similar on Fresh Air two years ago. And although he thinks it unlikely Dawkins speculates that life here on Earth may have begun because one of these superbeings got the ball rolling with an initial seeding.
...
Now Dawkins says that he doesn't believe in God because he thinks that God has to be infinite, and has to exist prior to the Big Bang, but he is, apparently, willing to believe in a finite god who is the end product of evolution. This doesn't seem an enormous distinction to me. Let's say a god-like being did kick off evolution on this planet and he or she has been watching us closely for the last 4 billion years (those first three billion must have dragged). Wouldn't it make sense then to worship and pray to this entity in the hope that we could benefit from the entity's largess? If sufficiently advanced couldn't this entity do just about anything including preserving our mind states and transmuting these mind states into another form after our deaths? Dawkins consistently mocks the efficacy of prayer and the belief in resurrection, but these are the logical outcomes of what he's saying here. Furthermore in a universe of 10 000 billion suns with billions of Earth like worlds that's been knocking around now for at least 13 billion years doesn't it seem more likely than not that these god-like beings have evolved somewhere and indeed are out there right now? Wouldn't prayer and worship seem like sensible, precautionary steps in dealing with these potentially terrifying entities? And what exactly does Dawkins's atheism mean if he is prepared to believe in gods, but not an infinite God? In the strict sense of the word Dawkins is not an atheist, he's an agnostic. Theism is the belief in at least one god, atheism is the certain belief that there are no gods.
...
Hold on a minute, you may be saying to yourself, can the world's most famous atheist really not be an atheist at all? Uhm, yeah, I think so. I also think that if you believe in evolution by natural selection (and the evidence is overwhelming folks) and if you believe that the universe is 13.5 billion years old (again lots of evidence) then strict atheism (belief in no gods or god-like entities) is not very logical. Somewhere, somewhen they must have evolved.
...
And don't even get me started on Dawkins's colleague, Professor Nick Bostrom and his theory that none of this is real to begin with and that we are all very probably living in a computer simulation controlled by god-like beings from the future.
Posted by adrian mckinty at 3:16 PM