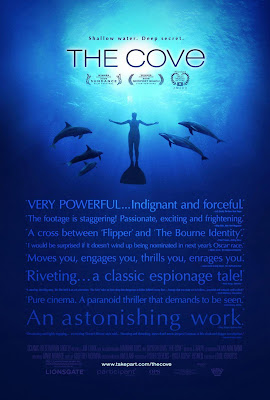 A few weeks ago I went to see a film called The Cove about the secret slaughter of dolphins in Japan and the shipping of the survivors to water parks (like Sea World) across the globe. I knew that if I wrote about the film then I would say something stupid and intemperate; unfortunately in the ensuing weeks I have not calmed down. If you get a chance to go see The Cove you should. Its a very well made documentary, both beautifully shot, oddly exciting and very moving. (There's a whole Soylent Green subtext too which is perversely funny). If self aggrandizing bully Michael Moore represents everything that is wrong with modern documentary film making, The Cove represents everything that is good. The hero of the film is Richard O'Barry who was the original trainer for Flipper and who after years of working in Hollywood had a Road to Damascus moment when one of his dolphins died in his arms.
...
The Cove is a wonderful film but you should probably skip it if you don't want your blood pressure to go through the roof. Also, don't take the kids. Here's Roger Ebert's four star review, and here's what Evan Williams said in The Australian.
Posted by adrian mckinty at 8:14 AM