A Good End To A Weak Season 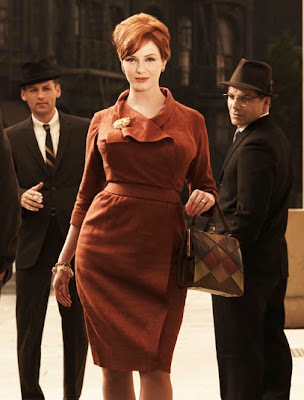 In the John Cheever story "The 5.48" a philandering Madison Avenue ad-man from Westchester County gets his comeuppance from a crazy woman he slept with and then completely forgot about. The TV series Mad Men takes place in the same time period and milieu as "The 5.48," and I've been dreading the appearance of a crazy lady with a gun since about episode 2. When Don Draper, the philandering ad exec who lives in Ossining, started seeing a nutty school teacher, I felt sure that this was how season 3 was going to end.
...
It didn't. Betty Draper, the enemy within, was the one who plunged the metaphorical knife, ostensibly because of Don's serial affairs with a bevy of brunettes, although it seemed to me that Mrs Draper decided to end their marriage more because she discovered he was poor white trash from West Virginia or thereabouts. She, of course, is a Main Line Bryn Mawr girl cut from the same cloth as Grace Kelly's character in High Society. And now that I think about it, I suspect that rather than following John Cheever as a model for future shows the writers of Mad Men will take us on a dance a bit like High Society (or the better original The Philadelphia Story) where Betty will have to choose between one of several suitors including her ex husband.
...
Most of the reviews I've read of Mad Men have raved about another brilliant season, but actually I think this series was weak and unfocused with a lot of non sequitur storylines and tangential plots. The secondary characters grew duller and were absent for much of the time. Did Kurt and Smitty have any lines at all this year? And I really missed Joan giving it the old boom shaka boom shaka boom round the office. At least we did get our weekly dose of Martian Pete Campbell trying desperately not to blow his human cover. Still, much of it was thin gruel. I wasn't impressed by the appearance of Conrad Hilton and I thought the manufactured fight between Roger and Don was pretty lame - Don really could do with a Moriarity but Roger isn't it. What saved season 3 for me was the strength of its final two episodes - last week's mournful riff on the Kennedy assassination and this week's exciting industrial espionage romp. Matthew Weiner has distilled Mad Men back to its essence and we're now literally in a small hotel room with all the main characters as they try to start a new company. Roger, Coop, Pete, Peggy and Joan allied with Don will make for good TV next go round.
Posted by adrian mckinty at 8:35 AM