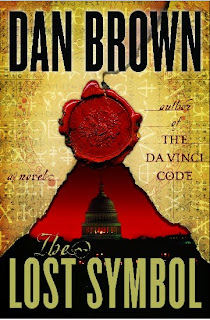 Ok, so I've taken the piss out of Dan Brown on this blog before, but I've got to admit that there's a good novel buried within The Lost Symbol. The story is fast paced, unusual and exciting. There are two excellent plot twists that I didn't see coming and the book's characters could possibly exist in the real world (allbeit a real world where an assembly full of high school students cheer wildly when they discover that their guest speaker is the secretary of the Smithsonian Institution). I listened to the audiobook version of The Lost Symbol and the narration was crisp and fluid and the characters were well differentiated. For at least three quarters of the book I was gripped by the premise and Brown's clever nesting of the plot within objects and arcana. I admired Brown's dispassionate prose which is the way to go with sensational material and I dug his device of leaving each chapter on a hook. The book takes place in Washington DC and there's murky goings on with masons - two elements that I also really enjoyed.
...
However, (and you knew there was a however coming didn't you?) the problems I had with The Lost Symbol were many. First of all, I didn't like the fact that the book ended and then we still had two full hours to go. Two hours of exposition, back tracking and explanation that added nothing to the story whatsoever; and it annoyed the hell of me that the people doing this exposition had just seen their loved ones tortured and killed, but somehow, avoiding a mental breakdown, they decided to lecture us on their own personal exegesis of the Old Testament. End the book already! I kept yelling at the iPod.
...
Secondly I didn't like Brown playing fast and loose with science: no Mr Brown ESP doesn't work, positive thoughts cannot reverse the growth of cancer cells, there is no such thing as a Jungian collective unconscious etc. etc. Those studies you mentioned about people praying for heart patients? - the results were the opposite of what you put in the book.
...
My third problem was Brown's use of the word "chuckle". Everybody was always chuckling. Nobody laughed, tittered, hooted, snorted, guffawed, broke up, convulsed, snickered, whooped etc. They just chuckled. And boy did they chuckle. They chuckled in extremis. They chuckled when recalling memories. They especially chuckled when revealing odd bits of masonic lore. Dan Brown's got fifty million dollars and a library of ten thousand volumes but he doesn't own a Thesaurus?
...
Ok, but that's enough of the hating. It's probably just jealousy. Dan Brown has written a page turner that's quite a bit slicker than the Da Vinci Code with less obvious howlers and better twists; so if you're looking for a good audiobook for your commute, I'd happily recommend it. (He said with a chuckle).
Posted by adrian mckinty at 8:13 AM