The Most Significant Event of the Decade - China's Rise 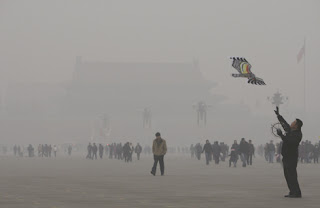 On December 29th in Urumqi, China, a mentally ill British national was executed (probably by lethal injection although the Chinese won't tell us) for smuggling heroin in a suitcase from Tajikistan. Akmal Shaikh, 53, and a father of three was convicted in a 2008 trial which lasted half an hour. During the proceedings the judges laughed at Mr. Shaikh's rambling attempt to explain the suitcase found in his possession and declared him guilty. A British national has not been executed in China since the Second World War, but despite pleas for clemency from British PM Gordon Brown and Foreign Secretary David Miliband the killing took place on time and in secret. According to the BBC "Mr Shaikh's family made continued calls for leniency right up until the execution deadline, citing his mental state, saying that he suffered from bipolar disorder. His daughter Leilla Horsnell said: "I am shocked and disappointed that the execution went ahead with no regards to my dad's mental health problems.""
...
China knows that nowadays it can do whatever it wants, whenever it wants to whomever it wants. In a process that began in 2003 President Bush began borrowing huge sums of money from China (through US Treasuries) to fund his wars; FDR raised taxes to beat the Nazis, Bush borrowed from the Chinese. The process continued throughout the decade as the United States non military budget also soared. In the last year Obama's Keynesian recovery plan was financed not by raising taxes but by selling even more Treasury Bonds to China. China is now our bank and the one person you can never afford to piss off is the bank manager. China's GDP growth in this recession year was a measly 7.5 percent and this year she expanded her conventional and nuclear arsenal - China is a bank manager toting an AK-47 in one hand and a TOW anti-tank launcher in the other.
...
Everything is now made in China: shoes, clothes, toys, kitchen equipment, tools, soon Volvo cars, not long after that, all other cars. The Chinese make everything, they work harder than everyone else, and there are 1.3 billion of them. This decade saw the Chinese began finally to flex their muscles protecting their heinous friends in such places as Iran, Zimbabwe, North Korea and Burma. If I were a third world dictator with, say, a big bauxite mine on my territory I'd cozy up to the Chinese too. This hegemonization process, is, I think, largely irreversible. America will not face up to the situation it is in: the Democrats won't cut entitlements or raise retirement ages, the Republicans won't raise taxes - the days of balanced budgets and paying down the debt are over. Europe and Japan are even more screwed as they age, become less productive, and increasingly irrelevant.
...
I've been to China and I found it to be a rough and scary place. People who care about human rights or weep about the West's treatment of animals should certainly avoid going there; but the Chinese way is the way of the future - their recent accumulation of capital is almost unparalleled in history and shows no sign (thanks to Paul Krugman and the Afghan War) of slowing. The Sixteenth Century belonged to the Spanish. The Seventeenth and Eighteenth Centuries to the French. The 1800's was the era of the British Empire and the Twentieth Century was dominated by America. Hopefully India will rise too as it is more my sort of place but for the moment I think we are all living in the Chinese Century and we just haven't realised it yet.
Posted by adrian mckinty at 10:35 AM