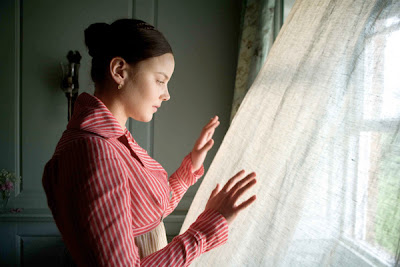 I so wanted to like Jane Campion's Bright Star. Campion is an auteur and an artist, she has a rich colour palette and she directs women very well. She points the camera with the deliberation of a Katsushika Hokusai and she is careful about every frame she shoots. Bright Star is full of dazzling imagery: the woods in summer, winter and autumn, a silent walk through tall reeds, an extreme close up of a needle and thread, and there's a beautiful scene of a lace curtain blowing into a room which could have gone on for an hour and I would not have complained. Yet the film doesn't really work. It's heavy on dialogue (much of it wooden) when Campion's trademark visuals would have told the story of John Keats's doomed romance with Fanny Brawne better and more delicately. Yes, its a film about a poet and the poet's words matter but film is a medium of the eye and Campion's gift is for turning a series of striking pictures into a narrative.
...
I liked Abbie Cornish as Fanny, but Ben Whishaw playing Keats was a bit of a wet blanket whose charisma and talents may be more suited for the stage or television. Separately they might be good actors but their chemistry together ain't exactly Bogie and Bacall. Much of the time I felt embarrassed for them and was hoping someone would yell "cut". The screenplay is baggy and takes a few liberties here and there (a man who once visited Scotland with Keats is turned into a Scotsman by the American actor playing him) and Campion leaves us with the impression that Fanny Brawne was utterly broken by Keats's death and walked Hampstead a lonely soul for the rest of her days when, in fact, she married a few years later and had three kids.
...
I don't think the problems in Bright Star are really Campion's fault (except maybe the casting). The sexism of the film industry allows someone like Lars von Trier to gleefully make terrible film after terrible film but the pressure on women directors to succeed is greater and if you don't you're finished. It took Kathryn Bigelow decades to claw her way back into the industry after a few setbacks and I suspect the squeeze on Jane Campion was immense after her last few releases failed at the box office. My biggest issue with Bright Star is that it suffers from a lack of ambition - it's the least Jane Campion-like of any her films and it seems that she was trying not to offend too many important people (money men/producers) with this safety first effort. As such it could comfortably be shown on a wet Thursday night on PBS (or BBC 2 or ABC1) and not create too much of a fuss. She can do so much better and be more unsettling and interesting. Hopefully with Bright Star under her belt Campion can go out next time and give us a mad, long, seriously deranged masterpiece that will have the money men screaming for her head.
Posted by adrian mckinty at 8:59 AM