The Sock That Sank The Presidency 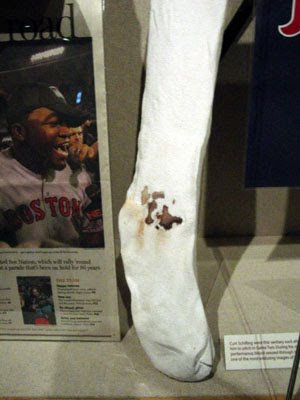 I married a girl from Newton, Massachusetts and I have family in Newburyport and Cape Anne. I've spent the last eighteen summers and most Christmases on Plum Island, Mass. My driving license is from Beverly and I took my test in Salem with a big State Trooper called O'Rourke. (I drove through a stop sign and could not parallel park and he passed me with flying colours.) So I think I know the Bay State a little bit. It was with incredulity then that I heard Democratic Senatorial Candidate for Ted Kennedy's seat, Martha Coakley, say live on radio that Curt Schilling was a Yankees fan. Curt Schilling. Curt frickin Schilling. Now, I am a Yankees fan and have spent far more energy than I should hating Curt Schilling. Curt Schilling was the Yankees killer in the 2004 ALCS (an event we shall never speak of again on this blog) pitching his games hurt and like Robert Redford in The Natural with 'blood' leaking out onto his uniform (in Schilling's case, his sock). Schilling won two World Series for the Red Sox which is two more than the revered Ted Williams ever did and the sock went into the baseball Hall of Fame. Curt Schilling is a god to Red Sox Nation; (he's also a right wing nut who wants to bring back the Witch Trials and thinks that The Flintstones was some kind of documentary) but for Martha Coakley to say that Schilling was a Yankees fan and then backtrack and then express befuddlement as to who Schilling actually is, played wonderfully into the GOP strategy of positioning her as an out of touch elitist. As soon as I heard her say that I knew the election was over. You don't diss Curt Schilling in Beantown. You might as well have got Ted Williams's frozen skull and played basketball with it. Oh wait someone's already done that.
...
Now that Coakley's lost the election the Democratic majority in the senate has sunk to a filibuster vulnerable 59 seats and Obama will not be able to pass many of the planks of his reform agenda. What a massive cockup. Couldn't the Democrats have found a candidate in Boston whose last name was Kennedy and who, oh, I don't know, likes the brews and an occasional visit to Fenway Park?
...
Because of the sock the game was lost, because of the game the ALCS was lost, because of the ALCS the World Series was lost, because of the World Series, the Presidency was screwed. (That and listening to the advice of Paul Krugman.) The Democrats of course have massive majorities in both houses but they are such lightweights they cant apparently do anything. I think its because they have no sock related icons of their own. Where have you gone Shari Lewis a nation lifts its lonely eyes to you.
Posted by adrian mckinty at 8:01 AM