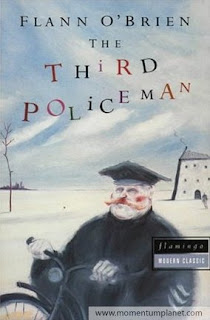 70 years ago today Flann O'Brien wrote to his friend William Saroyan that he had completed a new book, a metaphysical detective novel called The Third Policeman. Alas, when the novel was sent out to publishers, just before the Nazi blitzkrieg on Western Europe there was scant interest and O'Brien (nom de plume of Brian O'Nolan) decided to shelve the book. He later became a little embarrassed by its weirdness and told friends that the manuscript had been stolen from the boot of his car while he had left it parked by the side of the road. The manuscript was finally found after his death by his widow and published in 1967. Of course it is Flann O'Brien's masterpiece and one of the great Irish novels of the century. Certainly the strangest Irish crime fiction story ever written. If you really want a plot summary read it here on Wikipedia but be warned there are many spoilers. If you haven't read The Third Policeman you should add it to your TBR pile. It's work, but what good thing isn't?
Posted by adrian mckinty at 8:43 AM