Paging Mr Dawkins...Er, How Do You Explain This? 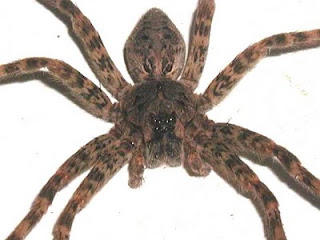 From The New York Times science section:
Researchers from the University of South Carolina Upstate and Indiana State University placed pregnant crickets in an enclosure where they were stalked, but not eaten, by a wolf spider, whose fangs had been coated with wax to protect the crickets. The young of the spider-exposed mothers turned out to be more predator-savvy than those with mothers who were not exposed to the wolf spider; they stayed hidden longer, and were more likely to freeze when they encountered spider feces or spider silk. In a second experiment, the researchers placed the juvenile crickets in an arena with a starving wolf spider with fully functioning fangs. Eventually, the spider got all the crickets, but the young born from spider-exposed mothers lasted longer in the arena of death. The research was published last month in The American Naturalist. What remains unclear is exactly how the crickets are warning their unborn. “We don’t know a specific mechanism,” said Jonathan Storm, a professor at the University of South Carolina Upstate in Spartanburg and one of the authors of the paper. Although it is conjecture at this point, he said, “It’s possible that there could be some sort of hormone transmitted.”
...
Maybe that Lamarck bloke wasn't as wrong as everyone thinks? Er, no, he probably was. Anyway, for my issues with Richard Dawkins click here. And for a really interesting look at where those little Hobbit people on Flora came from check out this fascinating theory in last Sunday's Observer.
Posted by adrian mckinty at 8:14 AM