Like Being Trapped in an Elevator With Robin Williams 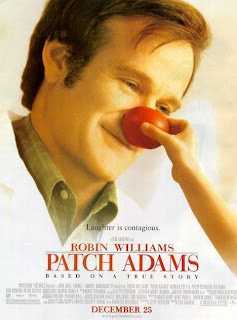 A recurring motif in my life has been how out of step I am with many aspects of our culture. I seem to be the only person I know who finds the music of the Beatles to be insipid, screechy and childish. I don't like watching cartoons in the cinema or anything with Hugh Grant in it. I don't like R&B music or Jazz and I'd go a thousand miles not to eat sushi, whether its fish, or, more likely, whale. I also am not a fan of The Harry Potter books or films - yeah I can see why kids like them, but why grown-ups tolerate that twee bollocks is utterly baffling to me. I also find Robin Williams to be completely insufferable.
...
My idea of hell would be watching Patch Adams, Mrs Doubtfire, What Dreams May Come, Jack (do you remember Jack directed by Francis Ford Coppola?), Jakob The Liar (!), Bicentennial Man (!!), Death To Smoochy, Old Dogs etc. bloody etc. on an endless loop. Robin Williams to me is mawkish, irritating and deeply unfunny in every film he's been in. And its not just the movies. When I'm flipping through the channels at two in the morning I'll often catch Williams on talk shows doing that tedious gay Latino bit he stole from Seinfeld or his impression of Ronald Reagan as a robot falling asleep. (Ronald Reagan - Jesus). The audience of course is always in stitches and I'm thinking, what the hell is the matter with you people? Are you all bloody morons? This guy is pathetic. I suppose you're the kind of eejits who laugh at Saturday Night Live.
...
I'm sure Robin Williams is a decent guy in person. I bet he's a great dad and apart from a few joke stealing allegations I dont think he's hated the way some people are in Hollywood. He recently got in trouble here in Australia because he called Aussies a bunch of English rednecks on David Letterman. Following this Kevin Rudd, the Prime Minister, felt it was necessary to give an offical response to defend Australia's honour. A response that happened to damn the lovely state of Alabama. This furore reflected worse on Rudd than Williams if you ask me and it made me wonder why the Prime Minister of Australia has nothing better to do than comment on the routines of stand up comedians; but then at least he didn't stoop to the Prime Minister of New Zealand's level by reading out a Top Ten list on Letterman.
...
But Kevin Rudd isnt really my problem, my problem is still Williams. His lame jokes and lamer films exhaust and weary me. I just want him to go away and have a nice quiet life somewhere with his millions. Of course I realise I'm in a minority with this view. Years ago I wrote a book called Hidden River, where I had this line: "it was like being trapped in a elevator with Robin Williams" which I used to describe my own personal nightmare scenario. My editor made me cut the line because, he said, Robin Williams was universally loved. When the book was being copy edited I asked the dour, Glaswegian, copyeditor if I could slip the line back in and, as a fellow misanthrope, he agreed. Of course Hidden River is now out of print and Mr Williams goes from triumph to triumph. C'est la guerre.
Posted by adrian mckinty at 11:03 AM