The Real Reason For The Belfast Riots 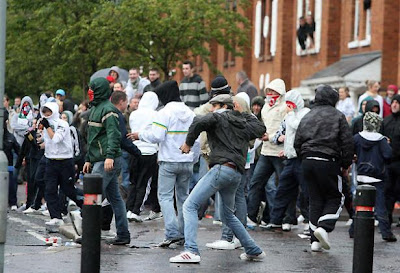 It just happens to be the oldest reason in the world:

From the Associated Press:
A prominent Catholic priest at the center of the main rioting area, [the] Ardoyne in north Belfast, said he feared that the latest rioting chiefly reflects the collapse of parental responsibility in local households, not any deep-seated political agenda. The Rev. Gary Donegan said violence that continued until 2 a.m. Wednesday in [the] Ardoyne featured rioters aged 8 to 18 — backed by crowds of girls capturing the mayhem on their cell phones for posting on social networking Web sites.

"Recreational rioting is the term," the 46-year-old priest said. "It was like a Disney theme park for rioting. It was ludicrous."

Donegan said he and local Ardoyne authority figures — among them Irish Republican Army veterans once involved in directing, not stopping, riots — tried all night to take rocks, bottles and stones out of children's hands, but the kids wouldn't listen. Donegan said he particularly talked to a 9-year-old boy who had walked a mile (2 kilometers) that night to reach the rioting zone. "I thought to myself: Where are your parents? Who's supervising you?" he said in a telephone interview.

The priest said girls, many of them dressed for a night out — "At one stage it looked like a Milan catwalk," he quipped — had come to watch the boys riot. The boys in turn appeared determined to impress the girls with their bravery. He said alcohol and drug abuse fueled their dangerous behavior as police doused the crowd with jets from a water cannon.

He said IRA dissidents opposed to Northern Ireland's peace process undoubtedly have played a background role in stoking the past three nights' rioting, which has spread to several other working-class Catholic parts of Belfast and other towns. But the priest said he and Ardoyne community leaders were openly questioning whether the area's children would have sought street fights with police even if the cited catalyst for the trouble — a small Orange parade near [the] Ardoyne on Monday night — had been barred by police. "That's the burning question for us," he said. "I saw children facing down what would have been hardened mainstream (IRA) republicans of yesteryear who are now full weight behind the peace process, and they were taking (abuse) from these young people who were literally out of control."
Posted by adrian mckinty at 5:22 PM