Last week Celtic FC played Sporting Portugal at Fenway Park in Boston. I didn't see the game but the match report in The Globe made it sound pretty good. 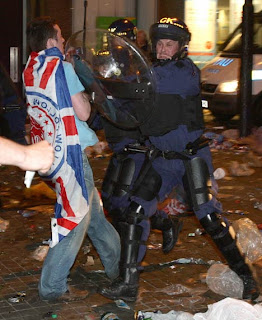 According to the BBC the Boston Red Sox in their wisdom are now trying to get Glasgow Rangers and Glasgow Celtic to play the first ever Old Firm game outside of Scotland at Fenway Park. Many stupid ideas come out of Fenway but this surely is one of the stupidest. I have worn a Mets cap and even a Yankees cap at Fenway several times. Boos, name calling, sarcastic remarks, maybe someone accidentally on purpose spilling their beer on you. That's about as bad as it gets. Like all baseball grounds Fenway Park is not segregated into a home and away section. Typically the only segregation is that based on income, between bleachers and box seats, between those of us stuck out in some drafty left field cliff face seat and the jerks behind home plate who don't even watch the game because they're busy talking on their phones and waving to their home boys catching their act on NESN. In every alleged 'classless society', class of course is everything. At the famous Yankees "roll call" it's only right and proper that after welcoming the Yankees players Vinny turns his wrath on the filthy rich and leads the chant of "box seats suck!"
...
Association Football my friends is VERY different. In European football the fans are segregated because otherwise they would kill each other. Often when the barriers break down they do kill each other. Or they wait until the game is over and throw milk bottles, and nails and molotovs at you as (this happened to me in Sheffield) you desperately run to the football-special train waiting to take you back home. It's a different world. This isn't about trash talk. This is about the Guns of August.
...
Once when I was coming into a stormy Miami Airport the plane lost 1000 feet of altitude in a few seconds. Once when I was in Jerusalem a guy dressed as a woman blew himself up. Once I had too much to drink, fell asleep in the subway and walked home along the entire length of 125th Street at two in morning getting yelled at by gangs who thought my plight was extremely amusing. Once I got into a fist fight and ended up with 18 stitches in my face and a grim faced surgeon muttered that I might lose my eye. And I can assure you that none of these experiences is as scary as an Old Firm game. Old Firm games are those between the Protestant Glasgow Rangers FC and Catholic Glasgow Celtic FC, but they are more than football, they are the continuation of a sectarian war that has been going since the sixteenth century. It's history. It's tribalism. It's vendetta, blood feud. It's Caveman A clubbing Caveman B because he's from the other side of the river. This is not a fun afternoon out for all the family. This is not Big Papi bobblehead day. This is Gerard Butler slaughtering the Immortals at the Hot Gates. The Old Firm game I saw was 90 minutes of tumult, aggression and fear. I had no idea what was going on on the pitch. I only wanted to get out of there alive. Seriously, my advice to anyone contemplating staging an Old Firm game at Fenway is to think twice.
Posted by adrian mckinty at 10:27 AM