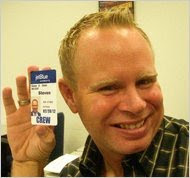 So I've been taking a break from blogging, TV, the internet and news while I edit my book and to whit I have carefully prepared a series of older blog posts to fill up the space for the next 10 days or so; I had no intention whatsoever of doing a new blog post on anything. No intention, that is until I became aware of Steven Slater a flight attendant for Jet Blue. On Monday a Jet Blue plane was taxiing at JFK when a passenger got up to get luggage out of the overhead compartment before the plane had come to a stop. Slater asked the passenger to sit down until the taxiing was over and the passenger refused. Slater went to confront the boorish lady. As the bag came out of the overhead locker the passenger brought it down on Slater's head (some reports say that Slater was hit with the luggage compartment door (and another report says that this happened at the beginning of the flight not the end)). The passenger then mocked and swore at the unfortunate flight attendant.

Slater stood there for a second or two and in that moment the gods reached down from Mount Olympus and filled him with arete the divine fire which turns ordinary mortals into heroes. Thus enthused he walked back to the flight attendant area, got on the PA system and cursed out the passenger in the most earthy tones he could think of (oh for a tape of this), then he went to the drinks cart, grabbed himself a beer, opened an emergency door, deployed the chute, said a final sayonara, slid down the chute with beer in hand, walked across the runway, got in his car and drove home to Queens.

According to The New York Times he was later arrested by the NYPD for reckless endangerment of an aircraft. He'll probably get convicted too. If he does, I'm writing to Obama for a presidential pardon. For all of us who have worked and are still working in the service industry Slater has become our patron saint. Well done, Mr. S. you shouldnt get jail time, you should get a bloody medal.
Posted by adrian.mckinty at 10:03 AM