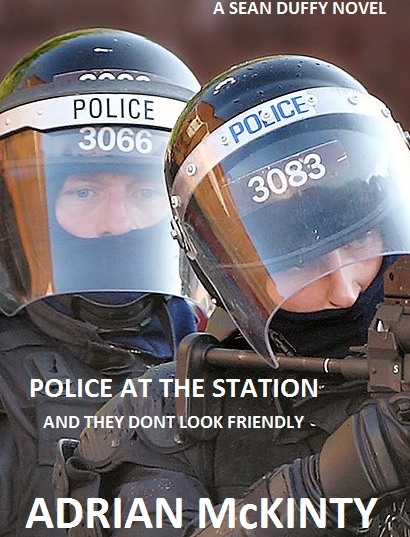 so as I said a couple of weeks ago Police At The Station And They Don't Look Friendly will definitely not be the last Sean Duffy novel. I've announced a new deal with Blackstone Books for a final Duffy trilogy. Here are some more details...(all the titles of course are Tom Waits songs)
...
Sean Duffy 7 will be called The Detective Up Late. Sean Duffy and the crew have to investigate a missing person's case that involves some very scary people. Around the station they're calling it "Duffy's last case" but untangling that particular thread threatens to unravel their whole world.

Sean Duffy 8 will be called Hang On St Christopher. Duffy serving out his days as a part time copper is called up to look into a 'simple' murder investigation while Detective Sergeant Lawson is on holiday. A portrait painter's car has been hijacked and he is shot dead in the attempt. Unfortunately for Duffy there was more to the painter than meets the eye and this is a far more dangerous and terrifying case than a simple carjacking gone wrong.

Sean Duffy 9 will be called The Ghosts of Saturday Night and deals with what happens as a result of the 90's Peace Process in Belfast when 300 murderers are released back into the general population many with old scores to settle and some bizarre new ideas to implement.
Posted by adrian mckinty at 7:38 AM

I was born and grew up in Carrickfergus, Northern Ireland. After studying philosophy at Oxford University I emigrated to New York City where I lived in Harlem for five years working in bars, bookstores, building sites and finally the basement stacks of the Columbia University Medical School Library in Washington Heights. In 2001 I moved to Denver, Colorado where I taught high school English and started writing fiction. My first full length novel Dead I Well May Be was shortlisted for the 2004 Ian Fleming Steel Dagger Award, was optioned by Universal Pictures and was picked by Booklist as one of the 10 best crime novels of the year.

I'm probably best known for my Sean Duffy books. The first Sean Duffy novel, The Cold Cold Ground, won the 2013 Spinetingler Award and was picked as one of the best crime novels of the year by The Times.

The second Sean Duffy novel, I Hear The Sirens In The Street, won the 2014 Barry Award.

Sean Duffy #5, Rain Dogs, won the 2017 Edgar Award and was shortlisted for many other crime fiction awards.

Sean Duffy #6, Police At The Station, won the 2017 Ned Kelly Award and appeared on many newspaper best of the year lists.

"If Raymond Chandler had grown up in Northern Ireland he would have written The Cold Cold Ground."
---The Times
"Hardboiled charm, evocative dialogue, an acute sense of place and a sardonic sense of humour make McKinty one of our greatest crime fiction writers."

---The Guardian
"A literary thriller that is as concerned with exploring the poisonously claustrophobic demi-monde of Northern Ireland during the Troubles, and the self-sabotaging contradictions of its place and time, as it is with providing the genre’s conventional thrills and spills. The result is a masterpiece of Troubles crime fiction: had David Peace, Eoin McNamee and Brian Moore sat down to brew up the great Troubles novel, they would have been very pleased indeed to have written The Cold Cold Ground."
---The Irish Times


"McKinty is a gifted man with poetry coursing through his veins and thrilling writing dripping from his fingertips."

"Adrian McKinty is fast gaining a reputation as the finest of the new generation of Irish crime writers, and it's easy to see why on the evidence of The Cold Cold Ground."
---The Glasgow Herald


"McKinty is a storyteller with the kind of style and panache that blur the line between genre and mainstream."

"McKinty's literate expertly crafted crime novel confirms his place as one of his generation's leading talents."

"McKinty crackles with raw talent. His dialogue is superb, his characters rich and his plotting tight and seemless. He writes with a wonderful and wonderfully humorous flair for language raising his work above most crime genre offerings and bumping it right up against literature."


"The first of McKinty's Forsythe novels, "Dead I Well May Be," was intense, focused and entirely brilliant. This one is looser-limbed, funnier...so, I imagine, is the middle book, "The Dead Yard," which I haven't read but which Publishers Weekly included on its list of the 12 best novels of 2006, along with works by Peter Abrahams, Richard Ford, Cormac McCarthy and George Pelecanos."

"McKinty, who grew up in Northern Ireland, has an ear for language and a taste for violence, and he serves up a terrifically gory, swiftly paced thriller."

"There's nothing like an Irish tough guy. And we're not talking about Gentleman Gerry Cooney here. No, we mean the new breed of bare-knuckle Irish writers like Adrian McKinty, Ken Bruen and John Connolly who are bringing fresh life to the crime fiction genre."

"McKinty's writing is dark and witty with gritty realism, spot on dialogue, and fascinating characters."

"If you like your noir staples such as beautiful women, betrayal, murder, mixed with a heavy dose of blood, crunched bones, body parts flying around served up with some throwaway humour, you need look no further, McKinty delivers all of this with the added bonus that the writing is pitch perfect."

"I really enjoyed combination of toughness and a striking literary style."

"This is a terrific read. McKinty gives us a strong non stop story with attractive characters and fine writing."

"[McKinty] draws us close and relates a fantastic tale of murder and revenge in low, wry tones, as if from the next barstool...he drops out of conversational mode to throw in a few breathtaking fever-dream sequences for flavor. And then he springs an ending so right and satisfying it leaves us numb with delight and ready to pop for another round. Start the cliche machine: This is a profoundly satisfying book from a major new talent and one of the best crime fiction debuts of the year."

"The story is soaked in the holy trinity of the noir thriller: betrayal, money and murder, but seen through with a panache and political awareness that give McKinty a keen edge over his rivals."

"A darkly humorous cross between a hard-boiled mystery and a Beat novel."

"A roller coaster of highs and lows, light humour and dark deeds, the powerful undercurrent of McKinty's talent will swiftly drag you away. Let's hope the author does not slow down anytime soon."

"A virtual carnival of slaughter."

"McKinty has once again harnassed the power of poetry, violence, lust and revenge to forge another terrific novel."

"McKinty writes with the soul of a poet; his prose dances off the pages with Old World grace and haunting intensity. It's crime fiction on the level of Michael Connolly with the conviction of James Hall."

"The Bloomsday Dead is the explosive final installment in a trilogy of kinetic thrillers."


"McKinty's Dead Trilogy has been praised by critics, who call it "intense," "masterful" and "loaded with action." If your reading pleasure leans toward thrillers offering suspense, close calls, wry wit, sharp dialogue, local color and sudden mayhem, you wont do better."

"McKinty - that guy is a friggin genius."

"McKinty is a cross between Mickey Spillane and Damon Runyan, the toughest, the best."


"McKinty is an exciting new talent."

Me & the Mrs in our survivalist bunker