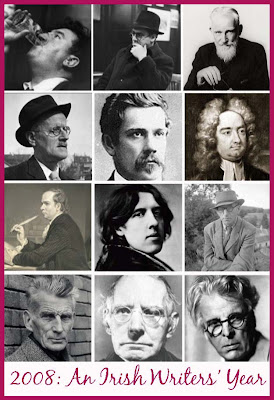 After my post last week (see below) about Martin McDonagh's use (or not) of negative Irish stereotyping, I was reluctant to return to that topic any time soon until I read a piece in the Guardian about a new play at the National Theatre in London which satirises various denizens of the East End through the centuries (including Huguenots, Jews, the Irish and Bangladeshis) who are all mocked "by use of the most absurd caricatures of their type." The play has kicked up a real furore in England especially among certain Muslim communities, but as one observer in the Guardian points out "it is particularly offensive towards the Irish and Bangladeshis." I haven't seen the play called England People Very Nice but apparently the Irish stereotype is that they are drunken, stupid, oafish and clumsy. This was a popular trope for English writers and comedians well into the 1980's even appearing in such sainted comedies as Fawlty Towers; but its been dead for a while and I have to say that I'm surprised to see it surface again.
...
It reminds me a little of an ugly incident in my past. On my first day at Oxford back in October 1991 I turned up at the porter's lodge of my college and the middle aged porter looked up my name on his clipboard and gave me the key to my assigned room. I carried all my stuff to the room and found that the key didn't work. I lugged all my stuff back and told him that the key was the wrong one and after a bit of grumbling he gave me a different key. Again I schlepped the stuff, tried the new key and again it didn't work. I went back and told the key keeper. After this second attempt the porter then unleashed an extraordinary tirade of anti Irish venom that would have done a sergeant major proud. In decidedly un-ironic tones he told me that I was a stupid Irish navvy of questionable parentage who wouldn't know the difference between a key and a horse's arse - this peppered with the lively use of the f word in its verb, noun and adverb forms. I was too stunned to reply (it was the first five minutes of my first day) and a second later he suddenly said "oh McKinty not McCleish" and gave me the correct key without so much as a sniff, never mind an apology.
...
Martin McDonagh's take on Irishmen may be an interior critique to which he is entitled but Richard Bean the author of "England People Very Nice" was born in Hull and appears unqualified to take such liberties. I wonder how much of Mr. Bean's satire is really satire and how much is very ancient prejudices bubbling atavisticly to the surface. Unlike America I don't think Britain changes that much over time. The next Prime Minister of the UK is going to be an Eton and Oxford educated member of the aristocracy and the last time they had an Irish PM it was the Duke of Wellington who said of his Irish roots "just because a man was born in a stable it doesn't make him a horse." Indeed.
Posted by adrian mckinty at 8:02 AM