It Is Better To Giveth Than Receiveth 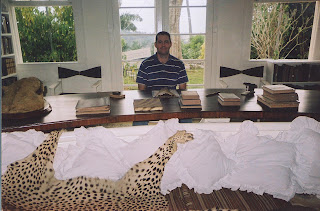 Or so they sayeth. Anyhoo...about that Fifty Grand giveaway competition I promised in the last post. First some background: In 2007 I went for a vacation to Cuba, primarily to visit Ernest Hemingway's house (right), a trip I have talked about in some length here. However I soon found that Havana was a very amenable place to get some writing done and without having a subject in mind or really with any clear idea where the book was going I ended up writing the first five chapters of Fifty Grand in long hand at the piano bar of the Ambos Mundos hotel. The reason I picked the bar of the Ambos Mundos was because legend had that it that that's where Hemingway wrote For Whom the Bell Tolls and I was kind of hoping that some of the magic would rub off. It didn't. Not really. 50 G is nothing like a book Hemingway would have written, however the geography did get me started and those 5 chapters are largely unchanged in the final book
...
Anyway as I was writing I was making notes in my journal and along the margins I noted what drinks I had ordered and how 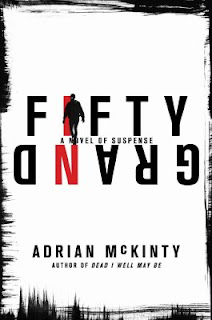 much they cost. That gave me the idea for this book give away. The competition my friends is this: How many drinks did I have in the composition of the first five chapters of 50G? The four people closest to the correct answer (and there is one distinct double figure answer that has been checked by my good lady wife) will be airmailed one of these incredibly rare signed ARCs of Fifty Grand.
...
Coupla clues: 1) the Ambos Mundos is an expensive place and I had to make the drinks last a while. 2) I drank four different things: coffee, beer, mojitos and cuba libres - I 'm after the total of all the drinks I had in the writing of those five chapters...Is all that clear? Hope so. The closing date for this competition will be Monday 9th March 8pm Melbourne time, which is 9am in the UK and 4 am on the Eastern Seaboard of North America. Good luck and don't forget your email address or click the email follow on if you have a google ID.
...
The final word: what do I get out of this? Well I'd appreciate it if the winners of the book would review me on Amazon or Goodreads or Amazon UK or your own blog. Doesn't have to be a good review, just a review would really help. Thanks a million.
Posted by adrian mckinty at 8:01 AM