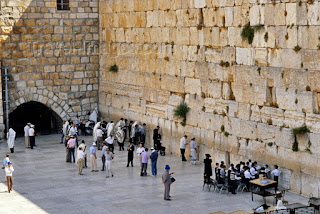 At the end of the 90's I lived in Jerusalem for a year. On the whole I liked it there: every morning I would go for a walk in the Old City through alleyways and narrow streets, usually taking in The Church of Holy Sepulchre, The Western Wall and The Dome of the Rock as well a few other sites here and there. Jerusalem was very interesting back then - as the millennium was imminent the city was filling up with crazies confidently expecting the end of the world. Jerusalem has a high proportion of crazies to begin with (there's an actual psychological condition known as Jerusalem Syndrome where people start hearing voices) but leading up to 1999 it got even better. Religious pilgrims and psychotics started flooding into town from all over the world. There were quite a few Jehovah's Witnesses and evangelicals who gathered on the Mount of Olives on December 31 1991 and I can only imagine their disappointment as morning loomed on January 1 2000 without Jesus riding a donkey through the Golden Gate.
...
Incidentally, just to be on safe side someone (the Mufti?) has had the Golden Gate bricked up and when my brother and I tried to get near it to take some photographs we were chased, but that's another story and not what I wanted to talk about. I wanted to talk about the Western Wall, the holiest place in Judaism. What's it the Western Wall of? I hear you ask. Well, it's the Western Wall of the Temple (Solomon's and later Herod's) and is the closest place Orthodox Jews can get to the site of the Holy of Holies where the Ark of the Covenant once stood up on the Temple Mount itself. I say Orthodox Jews because anyone can go up to the Temple Mount and visit the Dome of the Rock which is the mosque built over the site of the Holy of the Holies (and a Roman Temple to Jupiter). I went there literally hundreds of times and you really can imagine the Ark of the Covenant resting there on the sacred stones.
...
Religious Jews won't set foot on the Temple Mount itself because no one actually knows where the Ark was placed and it would be blasphemous to walk on the ground where the Ark could have been. For most religious Jews the Western Wall is close enough and it itself is a special place, a kind of conduit direct from Earth to Heaven. Many people (not only Jews) leave messages or prayers between the massive stones of the wall in the hope that this "direct telegraph to God" will help grant their prayers. Hundreds, sometimes thousands, of prayers are left at the Western Wall every day and it's quite affecting watching people leaving little scraps of paper between the stones.
...
For the last decade you've been able to email prayers to Jerusalem and have them placed in the wall. The service is completely free and anyone can do it. But now they've taken it to the next logical step and I'm not sure about this at all. I'm still only vaguely aware of what Twitter actually is, but apparently now you can Tweet God by texting a message to these people and they will place it in the wall for you. Apparently Twitter only permits 140 characters maximum thus encouraging text abbreviations of the LOL variety; word of advice though, if this service actually works, I'd be careful with WTF, OMFG and LMFAO, there is that pesky 3rd Commandment to consider.
Posted by adrian mckinty at 10:06 AM