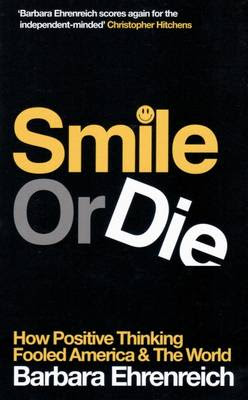 My book of the year so far is Barbara Ehrenreich's Smile or Die about the positive thinking/self help industry that began in North America and has now spread its obnoxious creed across the world. As Sinclair McKay explains in his review in The Daily Telegraph:

Ehrenreich encountered this phenomenon in some force when she was diagnosed with breast cancer. From the mammogram on, she found that she had entered a world of pink ribbons, Ralph Lauren pink ponies and balloons, of “fun runs’’, of books featuring personal testimonies with statements like “cancer is your ticket to your real life’’ and “cancer will lead you to the divine’’. Ehrenreich found that any expression of dissent – any suggestion that one found the illness frightening, and the treatment and insurance arrangements disgraceful – led to her being howled down online by fellow sufferers for having a “bad attitude’’ and “anger and bitterness’’.
...
Ehrenreich goes on to investigate the positive thinking phenomenon in various aspects of American life. Her dissection is neat and although it isn't quite Jessica Mitford or Neil Postman it is a long overdue and useful corrective to the smarmy Dr Phil, the creepy Oprah and the dangerous James Ray et. al who tell us that "we can do anything if we only try hard enough." This, of course, is not true. In fact we're all utterly screwed, we're going to die very soon, the game is rigged against us and blaming our alleged failures on our own lack of will is a recipe for despair. I think its far better to think negatively, have the odd misanthropic laugh now and again at the follies of mankind and try to finish each day with a really good beer.
...
I had one quibble with the book. Among the statistics Ehrenreich trots out is a debunking study of cancer patients: the ones who "think positively" have exactly the same recovery rates as those who don't. This may be true, but in my experience being pleasant and friendly to the nurses really does help you a lot in hospital.
...
In lieu of the book which is published by the sometimes difficult to find Granta you can read the rest of the review by Sinclair McKay here in The Daily Telegraph.
Posted by adrian mckinty at 8:50 AM