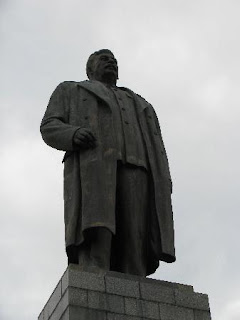 I couldn't care less that Tony Kornheiser has been suspended by ESPN for his "sexist" comments about Hannah Storm. I don't listen to his radio programme and the "banter" that he reads from the autocue on PTI is pretty tedious. I do however listen to Baseball Today and (in a story that's gotten virtually no coverage) I'm upset that the great Peter Pascarelli has apparently been fired for daring to suggest that a statue in honour of baseball commissioner Bud Selig in Milwaukee was a bad idea and that maybe it would look better after the pigeons went to work on it. Pascarelli made the light hearted comment on Baseball Today two weeks ago. The next day he was forced to go back on the air and issue a grovelling apology, praising Bud Selig as the greatest baseball commissioner ever. That podcast was excruciating and was like listening to Zionviev apologise to Stalin during the Show Trials, but, unfortunately, it wasn't enough and Pascarelli has now been canned. Baseball Today continued last Thursday without Pascarelli and with no mention of his fate - exactly the way Kamenev, Zinoviev and Trotsky etc were air brushed from history by the Soviets.
...
Selig must be pretty thin skinned if he demanded Pascarelli's apology and dismissal but what would you expect from the cowardly incompetent who praised the laughable Mitchell Report and who with a nod and a wink presided over the steroid era - an era that ruined baseball stats forever.
...
ESPN is worse, though, lacking even the cojones to mention Pascarelli's name or telling us to which part of the gulag archipelago he has been shipped.
Posted by adrian mckinty at 8:47 AM