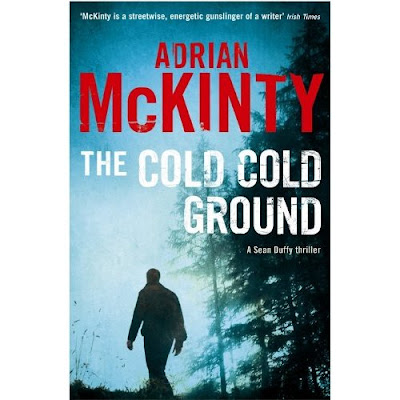 Coming in January 2012...Hey, do me a big favour, tell a friend about this book. And then tell two more friends...

It's undoubtedly McKinty's finest novel: a visceral journey to the heart of darkness that was 1980's Northern Ireland. Written with intelligence, insight and wit, McKinty exposes the cancer of corruption at all levels of society at that time. Sean Duffy is a compelling detective, the evocation of the period is breathtaking and the atmosphere authentically menacing. A brilliant piece of work which does for the North what Peace's Red Riding Quartet did for Yorkshire.
---Brian McGilloway
THE COLD, COLD GROUND is a razor sharp thriller set against the backdrop of a country in chaos, told with style, courage and dark-as-night wit.  Adrian McKinty channels Dennis Lehane, David Peace and Joseph Wambaugh to create a brilliant novel with its own unique voice.
---Stuart Neville
The hunger strikes mark the bleakest period of Northern Ireland’s ‘Troubles’, and it’s entirely fitting that Adrian McKinty should be the writer to plunge into that darkest of hearts. It’s a rare author who can write so beautifully about such a poisonous atmosphere, but McKinty’s prose is a master-class in vicious poise as he explores the apparent contradictions that underpin Ulster’s self-loathing. Be in no doubt that this novel is a masterpiece: had David Peace, Eoin McNamee and Brian Moore sat down to brew up the great ‘Troubles’ novel, they would have been very pleased indeed to have written The Cold, Cold Ground.
---Declan Burke
The Cold Cold Ground is a fearless trip into Northern Ireland in the 1980’s:  riots, hunger strikes, murders -- a time when every action from the mundane to the extreme is a political statement, yet Adrian McKinty tells a very personal story of an ordinary cop trying to hunt down a serial killer.
---John McFetridge
Adrian McKinty's The Cold Cold Ground has got to on my five best of the year [list] as it is riveting, brilliant and just about the best book yet on Northern Ireland.
---Ken Bruen

Adrian McKinty is the voice of the new Northern Irish generation but he’s not afraid to examine the past. Through Sean Duffy, his latest protagonist, he applies his unique writing skills to our troubled history expertly. This writer is a legend in the making and Cold, Cold Ground is the latest proof of this.
---Gerard Brennan
Posted by adrian mckinty at 7:11 PM