more than 13 ways of looking at a blackbird 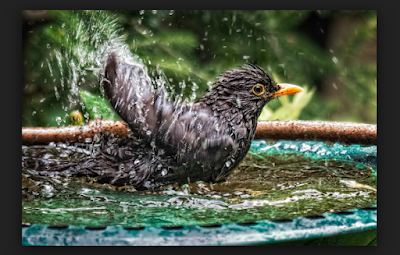 you might be familiar with the anonymous 9th century Irish poem "a blackbird over Belfast Lough"
which has been translated many times, perhaps most famously by Seamus Heaney and Ciaran Carson amongst others... A pencil sketch of the Lagan valley blackbird is now the symbol of the Seamus Heaney centre.
...
Anyway I love this little fragment of a poem and I thought I would offer up my own translation for your approval. The male pronoun works I think because in general only the males have a yellow nib to their beak. There's a little bit of invention with the use of "mudflats" but I figured that was ok because most of the translators of this poem use the word "Belfast" and Belfast as a concept didn't exist until the seventeenth century whereas the muddy "Black mouth" of the Lagan clearly did exist as a place back in the 9th century. I also didn't completely cheat in the rhyme scheme - in Ulster English beak is pronounced bake and round my way sometimes beagh which sounds a bit like lough.
...
This poem is a little bit like Basho's famous frog haiku which has inspired MANY translations, because, I think, it is so simple.

Anyway here's my version of the poem followed by the Irish itself...

from the tip of his yellow beak

a blackbird amongst the gorse blossom

over the mudflats of Belfast Lough

-anon from the Irish c.9th century