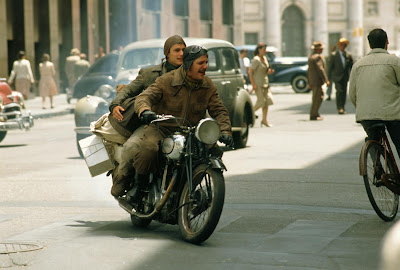 I was somewhat taken aback while watching The Motorcycle Diaries to discover that young Ernesto Guevara and his best friend decided to ride around South America on a Norton. This isn't going to turn out well, I thought and was proved correct about 30 minutes in. Unless you're rich and can afford a Brough Superior (TE Lawrence owned 7 of them) or you're willing to travel to India to get an Enfield, British motorcyle enthusiasts fall into two camps: those who ride Nortons and those who ride Triumphs. Over the years I've had countless conversations on the relative merits of the two companies and their machines. It's not a moot point, because although both went bankrupt in the 1970's now both are going again and making bikes in small but profitable numbers. The Norton however has a reputation for looking good on the outside but for breaking down under the slightest bit of pressure. I've ridden Nortons before and they're very cool but I wouldn't trust one to get me to the local chippie. It wasn't a big shock in The Motorcycle Diaries when Che's Norton went kaput, couldn't be fixed and the boys had to travel around by bus instead. So what should young revolutionaries of today ride? There's only one answer. What was Brando's bike in The Wild One? - a Triumph. What was the bike that almost killed Bob Dylan & is proudly displayed on his T shirt in Highway 61 Revisited? - a Triumph. James Dean's motorcyle of choice? - a Triumph. Richard Gere in an Officer and a Gentleman? What did Steve McQueen ride around on in The Great Escape? - a Triumph 650 (though it should have been a BMW). What did travel writer Ted Simon explore the world on? - Uh huh. Which bike did Evel Knievel use to jump the fountain at Caesar's Palace? - yeah that's right. What was Dean Martin's machine in the cult cheese fest The Ambushers? Yes.
...
The gift of a Norton Commando 850 was a major plot device in last year's AMC series Rubicon...interestingly at no point did we ever see anyone ride the Norton. We saw it in bits all over the hero's floor but it was never actually moving.
Posted by adrian mckinty at 10:50 AM