A High Wind In Jamaica 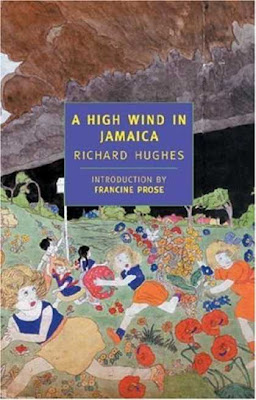 When the Modern Library brought out its list of 100 Best Novels of the Twentieth Century I felt pretty smug. I'd read about half the books mentioned and had many of the others on my TBR pile. But there at #71 on the list was a book I'd never even heard of: Richard Hughes's High Wind in Jamaica. I was intrigued by the title but forgot about it until I was in the Denver Public Library a year or two later and saw a book with a cover by folk artist Henry Darger. Darger had made a big impression on me at an exhibition of his work at the Museum of American Folk Art in New York. He was a former mental patient from Chicago who had been painting in secret for fifty years. The paintings illustrated his 10,000 page novel In the Realms of the Unreal as well as his meticulous decades long weather journal. "What is this book with a Darger cover?" I wondered excitedly and saw that it was AHWIJ. I got it and read it over the next week in the staff room. The first chapter or two were hard to digest, but suddenly, after that, the book just clicked. I don't want to provide any plot spoilers, so I'll just say that it's the story of a bunch of English kids who get kidnapped by fairly incompetent pirates. The prose is lush, rich, careful and exotic and the narrative is surprising, haunting and beautiful. The edition with the Darger cover is from NYRB who have amassed quite a strong collection of twentieth century classics, all lovingly put together with intelligent introductions and high production values. I really loved AHWIJ and if I were compiling a list of the 100 best English novels of the century, I'd definitely have AHWIJ on there and it would probably be up in my top 20.
...
One piece of trivia. They made a pretty forgetable movie version in 1965 but one of the children who gets kidnapped is British author Martin Amis acting his little cotton socks off.
Posted by adrian mckinty at 4:27 PM