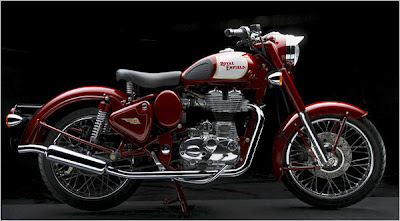 In 2002 I was fortunate enough to ride a Royal Enfield motorcycle in India. A few years later I rode one again in Cambodia. Along with Triumph and Norton, Enfield was the last of the three great British motorbike manufacturers; all three however went bust under the pressure of fierce Japanese and German competition. Norton and Triumph got resurrected in the 90's and if any of you were reading this blog last year, you'll know of my love for Triumph's stylish machines. But the Enfield story is more interesting. Yes Enfield went broke in the UK but they sold the chassis and blueprints to the Indians and they've been making Enfields continuously for the last half century. Late last year in Madras the Indian Enfield company had exciting news: the first completely new Enfield model in 54 years - the Bullet Classic C5. As of May 1 the BCC5 is now available in the US and Europe for a relatively inexpensive 6000 dollars. With 500cc of power, 80 MPG and enough charisma to cure Angelina Jolie's baby fever this is a lovely piece of equipment. The reviewer the NYT sent to test the Enfield was too chicken to ride it in the streets of Madras but the rest of his justifiably gushing review and some very nice pics are here.
Posted by adrian mckinty at 6:35 PM