The Kvetcher in the Rye 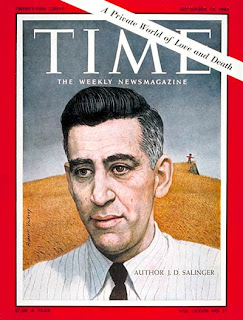 JD Salinger surfaced yesterday to stop the release of a novel in Britain and the US which the publishers call "a sequel to Catcher in the Rye." Salinger's lawyers call the book a "rip off pure and simple" and although the publishers are trying to say that the work is more of an homage than a rip off, it looks to me like the book is in violation of every copyright convention out there as it uses characters and situations from Catcher. The author apparently lives in Sweden but goes under the nom de plume John David California, which makes me think that he is in fact Swedish, I don't see an American picking that pen name and very few novelists choose Scandinavia as a good tax haven. The BBC has a bit more on the story here, but what's interesting to me is the fact that JDS is still alive, kicking and angry up in his somewhat isolated (though I drove past it once) home in Vermont. He hasn't published a novel for 57 years and many people wonder what he's been doing all this time. There are two schools of thought. The first is that rather like Harper Lee, he knew he couldn't top himself after Catcher in the Rye so he hasn't written anything. And it is true that he meditates a lot and watches a fair bit of daytime TV. But I prefer the second theory. In her memoir Dream Catcher, JD's daughter Margaret says that Salinger would write every single morning and occasionally he would show her manuscripts of completed novels. Supposedly these manuscripts are in a bank vault in Cornish, Vermont to be published after Salinger's death. Since Catcher is one of the funniest novels I've ever read I'm intrigued and excited by this possibility though of course I do wish Mr Salinger, who is 90 years old, a good few years yet. Tomorrow, incidentally, is D Day and Salinger is a D Day veteran. A platoon sergeant who fought with his troops throughout the Normandy campaign, he took part in the capture of Paris and had a drink with Ernest Hemingway (who had read some of his short stories) in the freshly liberated bar of the Ritz Hotel; I really hope, in a bank vault somewhere, there's a piece JD's written about that.
Posted by adrian mckinty at 2:38 PM