(This is an old post that I thought I'd dig up with the news that filming has finally begun today(!) on Peter Jackson's version of The Hobbit.) 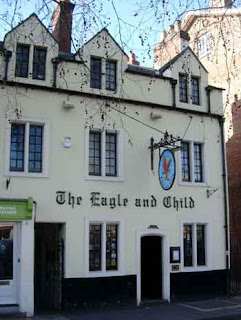 If you are a literature groupie you might enjoy this list. It's my top 10 places - obviously highly subjective - where you can soak up the atmosphere of a particular writer or a certain milieu. Rather conventionally I'm giving you my list in reverse order and keen observers may note that there's actually 15 discrete locations but then math was never my strong suit.


10. The Eagle and Child Pub, Oxford, England. The bar where JRR Tolkien and CS Lewis used to go to read out loud their works in progress and get criticism and advice from their peers. Large chunks of The Lord of the Rings and the Narnia books were composed here. They serve real ale and Philip Pullman and even Alan Moore have been known to pop in. Consequently it's a kind of a nerd paradise and it's where I met that lucky lass the future mother of my children.


9. Dostoyevsky's House, Saint Petersburg, Russia
Ok the whole thing's fake, the furniture isn't period and no one knows exactly what his apartment really looked like, but it is as close as we're going to get to the real McCoyski. When I was there they had a free walking tour map where you could follow Raskolnikov and other characters' routes through the city and that's a great thing to do as long as you don't kill an old lady at the end of it.


7. The Colburn Hotel, Denver, Colorado
Kerouac, Ginsberg, Cassady and William Burroughs used to go to Ginsberg's room in the Colburn to take acid, mescaline and other pharmaceuticals and watch the sun set setting behind the Front Range Mountains. I've never enhanced my experience in such a way but the sun sets are nice. 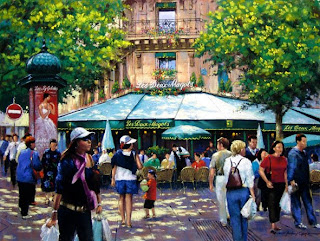 This cafe was the centre of the literary universe for periods in the twenties and again in the fifties. Who mooched cafe au laits and wrote here? Who didn't? Its patrons included: Scott Fitzgerald, Joyce, Dos Passos, Djuna Barnes, Sartre, Camus, de Beauvoir, Beckett and many others. I mean ok so it's an expensive tourist trap these days but you still have to go here once in your life if only to experience the rudest wait staff in the Western World.


5. The British Museum Round Reading Room, Bloomsbury, London
This is where Karl Marx wrote Das Kapital and where anybody who was anybody in British letters did their research and writing. Dickens, Trollope, Thackeray, Auden, Orwell, Waugh, Maugham, Amis etc. all used the RRR at some point. Now that the British library has moved to St Pancras anyone is allowed in to visit the RRR and if you go there early before the hordes of screaming children it can be quite pleasant.


4. The Piano Bar of the Ambos Mundos Hotel, Havana, Cuba
This atmospheric joint is where Hemingway wrote For Whom The Bell Tolls. Be warned the current pianist has an inexplicable fondness for Celine Dion.


3. The Bar of the Ritz Hotel, Paris
The Ritz Hotel was "liberated" by Ernest Hemingway and a few American infantrymen in August 1944. A massive drinking session ensued. Sergeant JD Salinger showed up and Hemingway bought him a few cocktails having been impressed by his early short stories. Oh if those old whisky bottles could talk...


2. Sleepy Hollow Cemetery, Concord, Massachusetts
Final resting place for Hawthorne, Emerson, Alcott and Thoreau and a short hike from Walden Pond State Park where you can visit a reconstruction of Thoreau's cabin. There are many great literary cemeteries in the world (Westminster Abbey and Highgate in London; Montmartre, Montparnasse and Pere Lachaise in Paris; the lovely Novodevichy Convent & Cemetery in Moscow) but this is a very special place. For me it's the epitomy of tranquil, quiet, autumnal loveliness and I wouldn't mind spending all eternity here myself (but not for a while yet).

1 (tied) Garcia Lorca's House, Granada, Spain
After the somewhat dull symmetries and broken fountains of the Alhambra why not walk down the hill to the home of Spain's greatest twentieth century poet. You won't be disappointed.


1 (tied) Dashiell Hammett's Apartment, Post Street, San Francisco
When I visited there was someone actually living here but he was kind enough to let me in anyway. Since this is also technically Sam Spade's apartment too it can be a big thrill for fans of The Maltese Falcon.


1 (tied) Robert Louis Stevenson's House, Apia, Samoa
I haven't actually been here but it's very high on my to do list. Mark Twain visited and was impressed and if I remember correctly Paul Theroux dropped by too. Anyway it looks charming and I'd like to go. 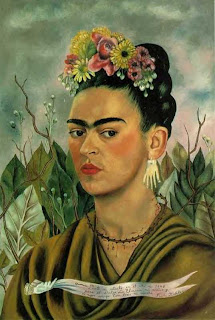 Ok neither of them are really writers (though Trot had a nice turn of phrase) but these houses are definitely worth a visit. They're very close to one another in the pretty Coyacan section of Mexico City which was actually a port in the time of stout Cortez. (Mind boggling). Trotsky's house was and is like a fortress and he's buried in the front garden. Frida Kahlo's home is one of the most beautiful interior spaces I've ever been in. She turned the house into a full blown extension of her personality and her art blossoms in every corner.


1 (tied) Ernest Hemingway's House, Havana, Cuba
It's quite the scene. If you want to read about my odd adventure in the Finca Vigia then click this link to The Times.

Hope you liked my little trawl through the literary necropoli. Let's do this again sometime, I've got a great story about how I tried to beat Dylan Thomas's record in The White Horse Tavern...
Posted by adrian mckinty at 9:18 AM